Réunion Island, formerly known as Bourbon Island, is a French department in the Indian Ocean. It is east of Madagascar and 175 kilometers from Mauritius. The flight from Paris to the capital, Saint-Denis, covers 9348 kilometers in 11 hours and 10 minutes, making it the longest domestic flight in the world.

It has a tropical climate with two seasons, summer from May to November and rain from December to April. Tourism plays an important role in the economy of the island. It is visited mainly by European tourists, many who have relatives on the island.

Activities and Places to visit in Réunion Island:

Réunion Island is one of the best places in the world to paraglide because they have the ideal climate with winds about 300 days a year. So much so that it was selected as the site of the Paragliding World Cup. The contrast between the ocean and the mountains provide beautiful scenaries for those who fly over the island.

There are about 15 tracks on the island, being Colimaçons (Saint-Leu) the most frequent. You go 800 meters over a sugarcane plantation to land on the beach near Kélonia. Most flights last between 20 to 30 minutes. Using the thermal winds it is possible to stay in the sky up to an hour.

On the island you can find several paragliding schools. They have options for children from 5-12 years. As well as for advanced gliders who want to go to more remote places. The Cirque de Mafate is a caldera on Réunion Island. It was formed from the collapse of the great shield volcano, the Piton des Neiges. It is possible to see this inaccessible site from the air coming from Dos d’âne and Maïdo. Taking off from Dimitile you can go to the south of the island: Saint-Pierre, le Tampon and l’Entre-Deux.

Kélonia is located in Saint-Leu in a place where there used to be a turtle ranch. When you enter you will see a store, which sells local handicrafts, with a unique selection of objects related to sea turtles and “eco-citizens” products. When leaving the building you will see some of the pools. This observatory of sea turtles has tanks with 1,500 cubic meters of seawater.

Kélonia participates in research programs to protect sea turtles and their habitats on Réunion Island and the Indian Ocean. The observatory has forged partnerships with teams from around the world. The health center Kélonia welcomes wounded or sick turtles, to release them in the sea once cured.

You can see species of native turtles from Réunion Island as hawksbill, loggerhead (Caretta caretta), olive ridley and green and leatherback. Apart they have terrestrial turtles such as Astrochelys radiata and Aldabrachelys gigantea that curiously coexist with chickens.

The facilities have educational and scientific exhibits that unfortunately have only descriptions in French. There is the possibility of paying for an audio guide in other languages. In addition, Kelonia proposes to discover the multiple uses of the turtle shell, which lasted until the 20th century, illustrating the place of the turtle in human societies according to times and places.

Stella Matutina Museum It tells the story of sugar and how it influenced the development of Réunion Island. Sugarcane reached the islands of the Indian Ocean in the 17th century. The taste for sugar began to become popular between the 18th and 19th century when demand increased.

The island that is currently known as Réunion was originally discovered by the Arabs 5,000 years ago. In the 16th century Europeans arrived and it was a colony of Portugal, England, Netherlands and then France. The economy of the island was based on plantations. Therefore, the place was used to produce and store food for locals and sailors.

Stella Matutina was an old sugar plantation and factory that since 1991 became a museum. From 2011 to 2015 it was closed to be renovated and is one of the most complete museum you can visit. It has the accreditation of ‘Musée de France’. The museum also shows what life was like on Réunion Island in the old days. At the end there is a shop that sells products from the island such as delicious rums and sugar.

France is the largest sugar producer in Europe and this is due to the production of the Réunion Island. Sugar represents 70% of the island’s exports and produces 12,000 direct and indirect jobs.

If you do not want to dive with or without a tank you can see the marine life of Réunion Island in the aquarium. The entire marine ecosystem is represented, from the lagoons to the deepest depths of the Indian Ocean. The tanks have a combined capacity of 600,000 liters.

On the plane we were told to beware of shark when visiting the beaches of Réunion Island. In the display of reef depths and open seas you can see black tip reef sharks, zebra shark and barracuda. They also have a display of the dentures of many shark species.

Every day they have special activities such as feeding the animals, backstage tours and scientific workshops. Some have additional costs.

Without a doubt, the best way to appreciate the natural beauty of Réunion Island is from the air. Several companies offer helicopter tours with options ranging from 15 minutes to 55 minutes. The longer the journey the greater the price and it is not an economic activity. Due to the volcanic topography of the island, many of the landscapes are inaccessible by land. And those that are, like Piton de la Fournaise, are far away and only offer a viewpoint. Being able to appreciate them in a panoramic way is a worth the investment. You should ask yourself “when will I go back and how many times will I ride a helicopter?” before making the decision to pass the credit card.

Pitons, cirques and remparts of Réunion Island are an Unesco World Heritage Site. This natural park occupies 40% of the island.

The shortest tour lasts 15 minutes and takes you to Mafate, which is the most inaccessible cirque. You can also fly over the Piton de la Fournaise, with 2,600 meters, one of the most active volcanoes on the planet. We took the tour of the whole island that takes you to the 3 cirques, volcano, waterfalls and the lagoon at the end.

If you are visiting Réunion Island during the weekend you must go to a market. In Saint-Pierre the market takes place on Saturdays, while in Saint-Paul Fridays and Saturdays. Both markets are very similar so it is better to just visit one. I went to Saint-Paul on a Friday. It is advisable to go early as they do not last as long. Many stalls begin to close around two or three in the afternoon. Another useful fact is to carry Euros since they do not accept other currencies like dollars and few stalls have points of sale for credit cards.

As is typical in markets, many stalls sell fruits and vegetables. The island grows many tropical varieties such as papaya, mango, pineapple, avocado, pitaya, bananas, coconuts, among others. But you can also species such as nutmeg, vanilla sticks and honey. There are stalls that sell processed foods such as vinegars, rum with dried fruit and fruits. Those looking for beauty products can buy organic soaps and creams. Also, there are stalls that sell natural medicine and teas. If you get hungry they also sell prepared food and drinks including beers.

The crafts are beautiful and very colorful. Many refer to the island with the French name “Ile de la Réunion” or its older name “Bourbon” which is now the name of the local beer. I bought colorful headbands with African fabrics and birds sitting on a frame made of paper mache in the few places that accepted credit card. 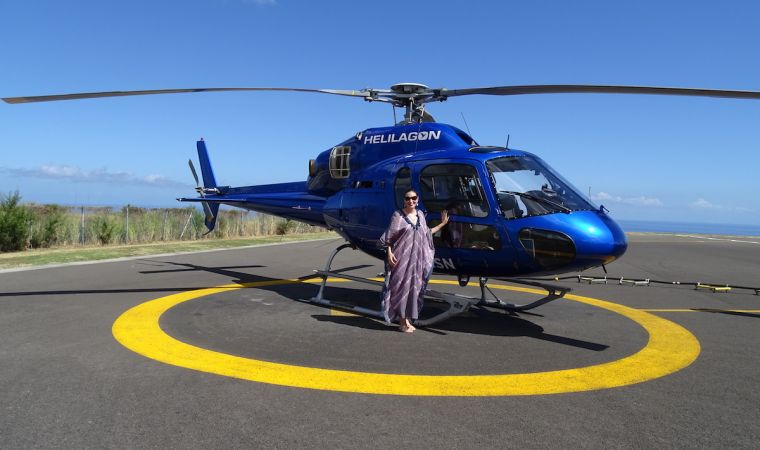