7 Things to Do in Glasgow

Today there are many things to do in Glasgow. In the past, it had a reputation as a difficult city. But, it always had a history of innovation and creativity. In the 1970s, Glasgow City Council recognized that culture could be used to frame the city’s reputation. Glasgow earned the title of European Capital of Culture in 1990 and its cultural structure changed forever.

Things to Do in Glasgow

After spending a lot of money in London, I was looking for things to do in Glasgow that had no cost. The Gallery of Modern Art (GoMA) fulfilled this requirement. It is very close to the train station and I saw it on my way to my Airbnb. On the outside you will find the famous statue of the Duke of Wellington. Since the 1980s it has been “vandalized” with an orange cone placed as a hat. It has been in this place since 1844, becoming a popular place for tourists to take photos.

The Gallery of Modern Art (GoMA) is a space where you can see and appreciate art that belongs to the citizens of Glasgow. It is the most visited modern art gallery in Scotland. It is housed in a building that was a mansion built in 1778, in what was the westernmost point of the city. Originally, it belonged to William Cunninghame who was a Tobacco Lord who made his fortune through the triangular slave trade. Then it became a bank, exchange site, library and finally, in 1996 it became an art gallery.

It is not an impressing gallery and can be seen in about 20 minutes. It has free WiFi and is warm inside, so I would not say it is not worth visiting. On the ground floor they have a shop with nice things and a bookstore. Its four galleries show works by local and international artists. Apart from temporary exhibitions and artist events. The most famous work is a lithograph by Andy Warhol, of his Campbell cans. The museum is very pro-LGBT and even the bathrooms which are gender neutral. Many of the collections have been based on strong themes such as asylum seekers and refugees; violence against women and sectarianism.

Sharmanka Kinetic Gallery is an alternative theater that is also located in Merchant City. It is open from Wednesday to Sunday with one or two shows per night. The place is located on the second floor of a building on King Street. It is recommended to buy tickets online. If you go during low season it is likely that you can buy them 20 minutes before the presentation. Once it starts, the doors close and nobody can enter or exit. The shows change schedules depending on the day of the week and it is advisable to check their website before going.

These shows are one of the few things to do in Glasgow between evening and night. I decided to watch “Promenade” at 5:30 p.m. on a Thursday. This show lasts 40 minutes and focuses on the pieces made by Eduard Bersudsky since he moved to Scotland in 1993. If you go with children this show is recommended, since “Wheels of Life” is longer, lasts an hour, and is darker. Most of the pieces in this show were made in St. Petersburg, Russia.

You must move according to the piece that comes to life. It is not known exactly which will be next. Each stays on about a minute and a half. The pieces are made of carved wood and pieces of metal, which could well be scrap metal. Each one has different movements and is accompanied by lights and music. Tatyana, the wife, and her son Sergey carefully designed the kinetic theater.

You can look for the mural of the “World’s Most Economic Taxi” on Google Maps. It is a good starting point to explore the route of murals in the city center. This is another one of the things to do in Glasgow that is free. Everything is in walking distance within Merchant City. Just by where I was staying, there was a parking lot on Ingram Street with a mural made by Smug. It captures the wildlife of Scotland and is so large that it requires several photos to document it.

Glasgow City Hall began commissioning spaces in an attempt to transform the city. There were many old, ugly and abandoned buildings. They were a reminder of difficult times and in 2008 they decided to give the city a new face. Since then street art is everywhere. You can take a guided tour (costs £ 10) or go on your own using a map.

Even though it sounds strange, the Necropolis was my favorite of all the things to do in Glasgow. I think it is due to my fascination with autumn that, fortunately, was in full swing. As soon as I entered I was excited to see leaves with so many different colors.

I was alone, so I had to ask some tourists to take pictures while throwing the leaves. Then I asked some Italians girls to take pictures of me lying on the colorful leafs. They looked at me with a crazy face and asked me if I wasn’t cold. It was very cold and I suffered with my hands while trying to take pictures.

The Glasgow Necropolis opens every day at 7 a.m. and it is one of the main tourist attractions of the city. This is due to the panoramic views visible from its top. 37 acres (14 hectares) make up the space of this cemetery that was designed based on Père-Lachaise in Paris. In 1832, the Cemeteries Law was passed in Britain, allowing burials for profit. Previously, the church had a responsibility to bury the dead, something similar to the General Cementery of La Paz. The population of Glasgow was growing and fewer and fewer people were going to church.

The city took advantage of this law and in April 1833 they opened the Victorian Necropolis of Glasgow. This cemetery accepts people of all religions. The first person to be buried was a Jew. More than 50,000 people have been buried and all have their record with name, date, gender and cause of death. You can walk among the 3,500 monuments on site.

The “Bridge of Sighs” follows the funerary route that leads from the Necropolis to Glasgow Cathedral. I crossed it to continue my journey of things to do in Glasgow.

This building is the oldest in all of Glasgow and is the oldest cathedral in mainland Scotland. Supposedly, this place was selected by Saint Mungo, patron of Glasgow. He was buried in the crypt during the 7th century. The first stone on site was consecrated in 1136, in the presence of King David I. The current structure was built between the 12th and 14th centuries.

This medieval cathedral is one of the few that survived the Reformation. It remains public property, under the responsibility of Historic Environment Scotland. There is no entrance fee and anyone can access. However, there are admission schedules that vary by season. From April to September you can go from 9:30 a.m. to 5 p.m. except on Sundays, which is from 1 to 4:30 p.m. In winter, from October to March, you can visit between 10 a.m. and 3:30 p.m. The Sunday schedule is from 1 to 3:30 p.m. There are guided tours with voluntary tips that last an hour.

A curious thing I saw in Atlas Obscura were the inscriptions in Hebrew on one of the pillars of the crypt. I tried to find them on my own, but it was impossible. I had to ask the volunteers of the Glasgow Cathedral. There are about eight lines that have not yet been translated.

We arrived at the University of Glasgow at 3:30 p.m. when it was almost dark. This beautiful university is the fourth oldest in the English-speaking world. It was originally founded in 1451 in Glasgow Cathedral by Bishop William Turnbull. He received permission for the foundation for a letter or papal bull from Pope Nicholas V. In 1460, it moved from the cathedral to High Street and then to its current location in 1870.

Fans of the Harry Potter books are going to love this place. It looks a lot like Hogwarts from the outside, even though the movie was filmed at Alnwick Castle. The courtyard is the same as where Harry learned to fly his broom in the first movie. If you visit Edinburgh you can go to a cafe called The Elephant House where J. K. Rowling wrote the first novel.

The Hunterian Museum is located at the University of Glasgow. Without doubt, it is worth visiting the oldest museum in all of Scotland. William Hunter died in 1783 and  established in his will that all his collections should be donated to the university. The museum opened in 1807 on High Street and then passed to Gilmorehill. Hunter was an anatomist and scientist who collected coins, minerals, paintings and prints, ethnographic materials, books and manuscripts, as well as insects and other biological samples from all over Europe.

Over the years others have donated to the collection, including fossils, art pieces and scientific instruments. Since 2011 there is a permanent collection that chronicles the time of the Romans in Scotland, including the famous Antonine Wall. There was also a bust of John Boyd Orr, who may have been a relative of mine since my grandfather had a last name Boyd.

Glasgow is an ideal city for beer lovers. You can take a walking tour of the bars or go to one of the many breweries. A quick Google search will give you more than 10 options spread throughout the city. I had just left the cemetery and planned to go to Tennent Caledonian Breweries. However, I entered the Drygate Brewing Co. which is next door, thinking they were from the same family. They explained that they were a fairly new “microbrewery”, operating since 2014. They had a tour that was about to start, so I stayed. I called my friends who were staying close by to join.

The Drygate Brewing Co. tour lasts one hour. Our guide explained the process of making beer and showed us the ingredients. The coolest thing was the art used in the labels. In the end we were able to do a tasting of four beers in quite large glasses.

Both breweries are visible from the Glasgow Necropolis. Tennent’s Wellpark Brewery has been in operation since 1885. However, Wellpark has been producing beer since 1556, being the oldest place in Scotland. Visiting the Tennent history heritage center is free. If you want to do a tour then you must pay.

Have you visited this city? What other things to do in Glasgow would you add to the list? Reserve your hotel in Glasgow on Booking. 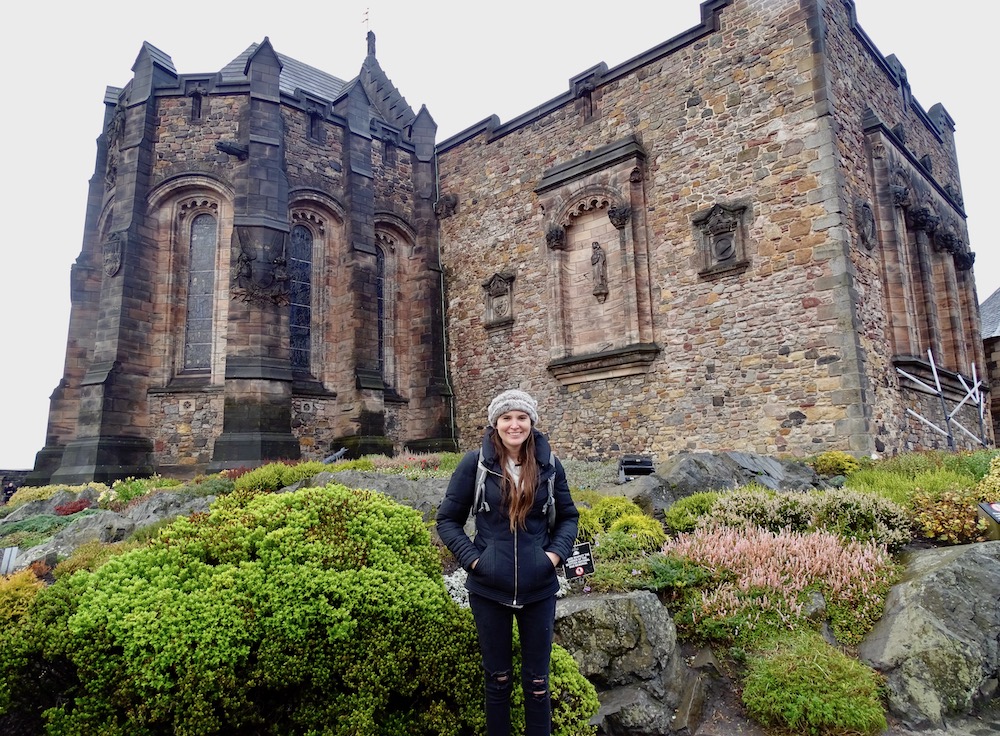