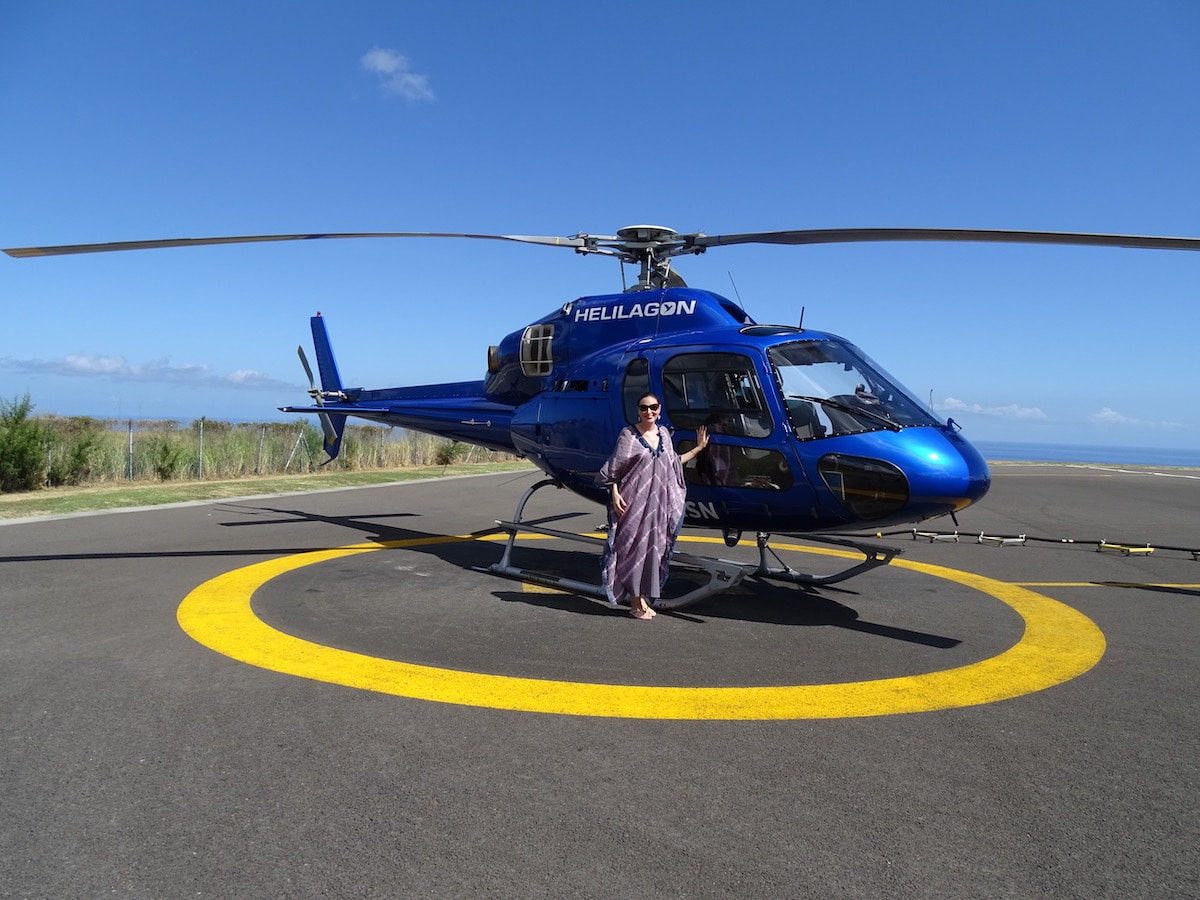 I went to Réunion Island with my mother, so doing a strenuous hike in the forest was something that was unlikely to happen. Especially since they said on the plane’s loudspeaker that there was a dengue epidemic on the island. But we wanted to see the most popular attraction: the Réunion National Park with its Pitons, cirques and remparts, which are just fancy ways for saying volcanoes, craters, and walls. You can also see lush forests, plenty of waterfalls and some scattered houses and villages.

We took a helicopter tour that lasted for 45 minutes leaving from St. Gilles. The helicopter company picked us at our hotel Boucan Canot in Saint-Paul to drive us to the departure point.

Upon liftoff you can see quite an impressive view of the beach and the Indian Ocean. Our tour was supposed to be in English, but it was impossible to hear what the pilot was saying so I have no idea if he was speaking English or French!

The “Ultimate Tour” takes you to see all three cirques, Piton des Neiges, the Maïdo, the Voile de la Mariée and the primary forest of Bélouve. Without a doubt, Piton de la Fournaise is the most impressive part of the tour, since this volcano is very active and you can see its craters and lava flows. It erupts constantly: April 2020, August 2015, December 2010, September 2008 and so on. The caldera of the volcano measures 8 kilometres (5.0 miles) in width. Its eastern flank is unstable and eventually will collapse into the Indian Ocean. Whether this will cause a mega-tsunami or not it is still up for debate.

Réunion National Park is a UNESCO World Heritage site called “Pitons, cirques and remparts of Reunion Island”. The mission of the park is to preserve the biodiversity and landscape. Before the 1600, all the Mascarene Islands including Réunion, Mauritius and Rodrigues were uninhabited. When the Portuguese and other Europeans arrived they introduced species such as giant snails that threatened the local species. These Mascarene forests are a biodiversity hotspot and are considered endangered by the WWF. Less than 25% of the island still has the original vegetation which can mostly be found in the highlands.

There are 230 endemic plant species of which half are endangered. The park also has 18 species of birds including the Réunion harrier, Barau’s petrel, Marsh Maillard, and the Réunion cuckooshrike. Other remarkable species include some butterflies, the Mauritian flying fox and the Reunion Island day gecko.

Most tourists who visit Réunion island go to this park which is considered a hikers paradise. There are more than 900 km (560 mi) of marked trails of different degrees of difficulty, including three long distance trails.

This is the most populated and sunniest of the three cirques of Réunion Island. Getting to Cirque de Cilaos by car is not advisable for people who suffer from motion sickness since you will have to drive on a beautiful road with more than 400 turns. The road starts at Saint-Louis passing by some remote settlements such as Palmiste Rouge and Ilet à Cordes. The village of Cilaos is set up on a large plateau dominated by the massive Piton des Neiges that rises up to 3,071 meters. It is a charming village, with thermal springs, that is the ideal starting point for over 80 kilometers of trails.

This cirque is known as the kingdom of cascades since there are multiple waterfalls rushing down the walls of the area. Voile de la Mariée or Bride’s Veil is one of the most famous one and it is accessible by road. If you are coming from Saint-Denis, then you need to take the Route Nationale towards Saint-André, then head for Rivière du Mât and the RD 48 towards Salazie. In the center of the Cirque de Salazie is the majestic Piton d’Anchaing (1,352m). The town of Hell-Bourg is considered one of the most beautiful villages of France overseas. Grand-îlet is another village that is more rural with Creole architecture. All of this cirque is included in the UNESCO World Heritage designation. Those who want to hike to Cirque de Mafate can use this as a starting point.

Of the three cirques in Réunion Island, this is the only one that is not accessible by road. To reach it you need to hike from one of three entry points: Rivière des Galets, Maïdo, Dos-D’âne, Taïbit (Cilaos) and the Col des Bœufs (Salazie). Despite its isolation, there are people who live in the area and even a village called “La Nouvelle” that has solar panels and a grocery store (supplies are brought up by helicopter).

If you choose to hike then it is best to take some money to be able to buy food or drinks in the local communities. There are also mountain huts for those that want to sleep overnight. In the past, this area was a refuge for runaway slaves.  “Mafate” comes from the Malagasy word “Mahafaty” which means lethal (an allusion to the difficulty of the access). The other way to see Cirque de Mafate is doing a helicopter tour like we did!