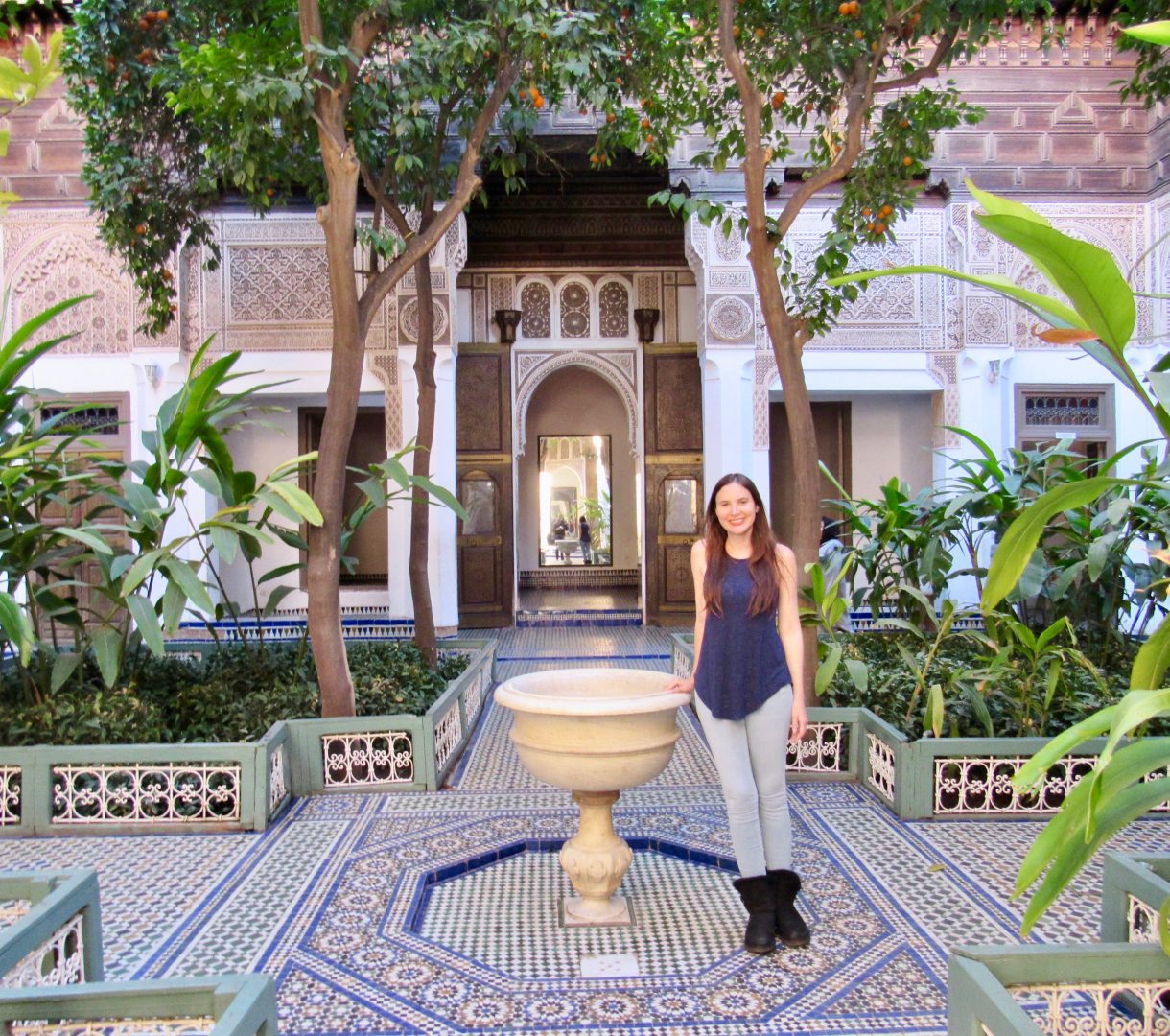 The Bahia Palace, like El Badi Palace, was built to be the largest palace of all time. This palace, unlike El Badi, is very well preserved and is a place you must visit because it is really spectacular. 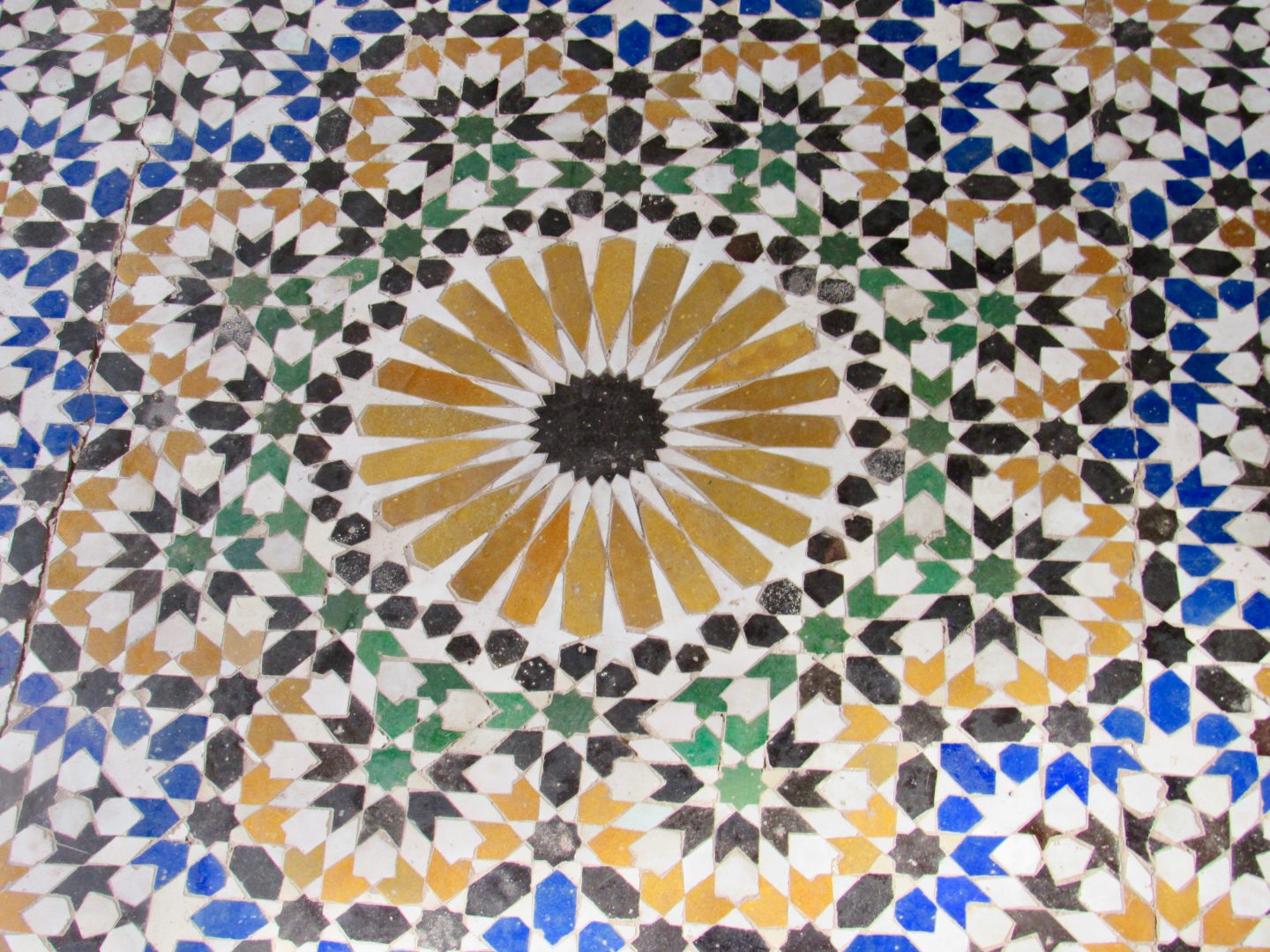 To find the palace you can walk inside the medina to Mellah, the historic Jewish quarter of Marrakech. 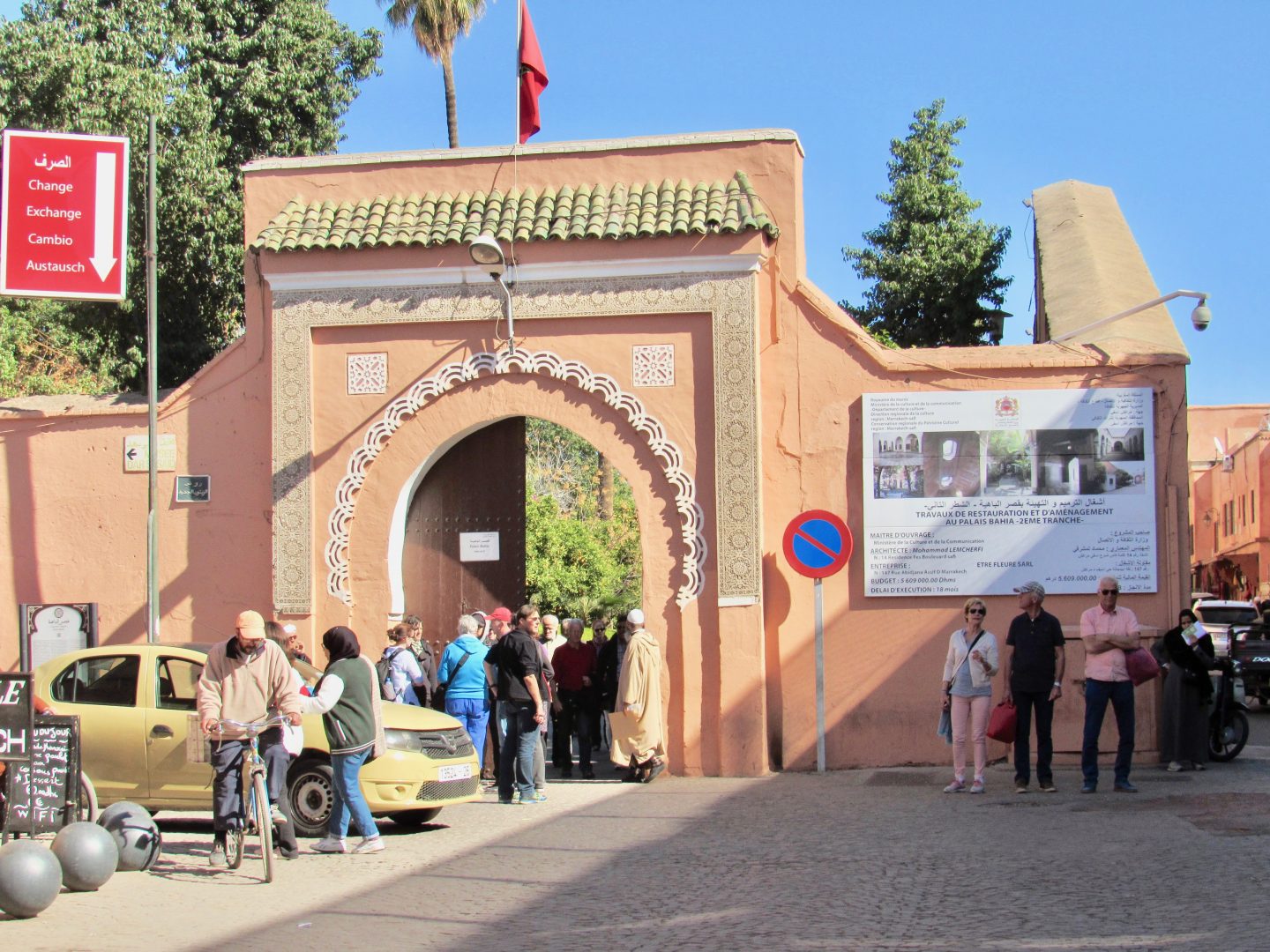 The Arabic word “bahia” means “beautiful” or “brilliance.” It was built between 1866 and 1867 on eight hectares. The same palace measures 8,000 square meters and was the largest and most luxurious of its time. It was designed by the Moroccan architect El Mekki. Si Moussa was the original owner but he was not always a rich man. His story begins as a slave and ends as the great vizier of Moulay Hassan, Sultan of Morocco. 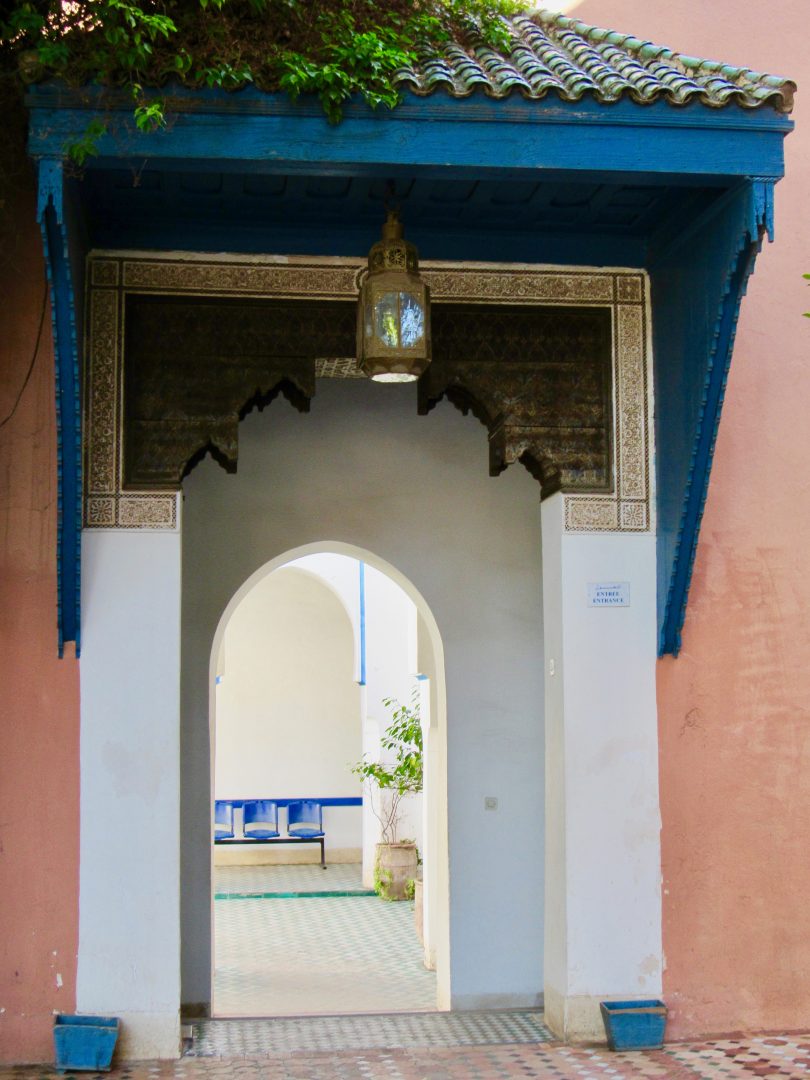 When he dies, the construction continues under the supervision of his son, Bou Ahmed or Ba Ahmed, who was also a great vizier of the Sultan until he dies. Ba Ahmed hides death until he manages to proclaim the 14-year-old son Moulay Abd el Aziz as the new sultan. He was almost the ruler of the country since the new Sultan was very young and had control over Morocco from 1894 to 1900 when he dies. 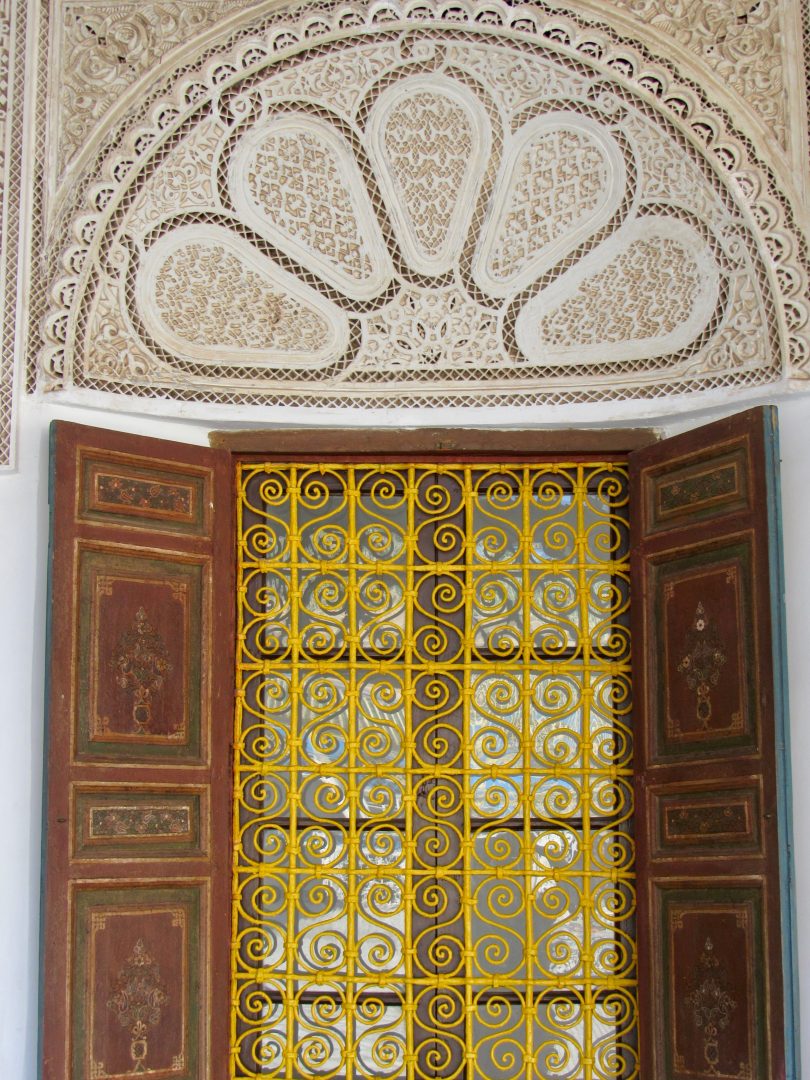 He enlarged the southern part of the palace to accommodate his entire family. He had 4 wives and 24 concubines. It is said that the palace was called as the vizier’s favorite wife. 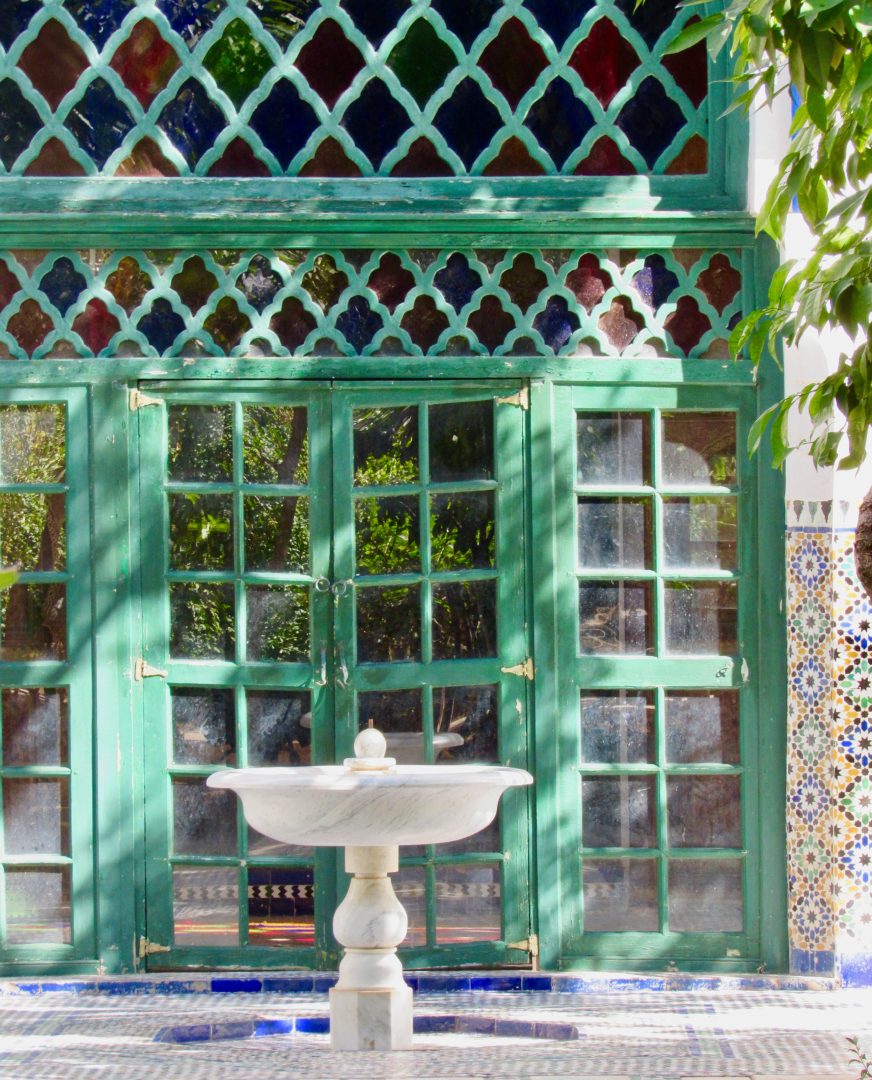 You cannot enter the part of the palace where the harem lived, but you can enter the house of his wife Lalla Zinab. This house is decorated with beautiful mosaics, carved cedar and stained glass windows that create colorful designs when the sun goes down. 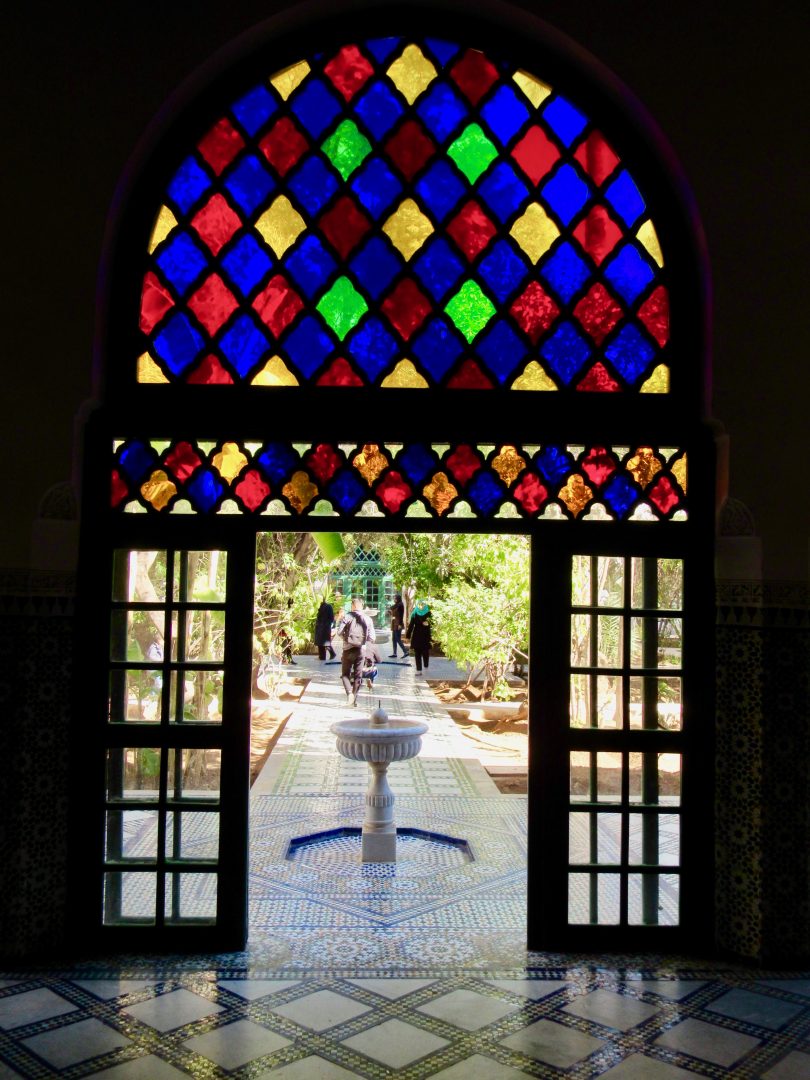 An Islamic and Moroccan style at the Bahia Palace

The palace does not follow a continuous design since you can observe that more rooms and gardens were added as they obtained more land. It is a bit labyrinthine but there is no desire to escape since all areas are beautiful. 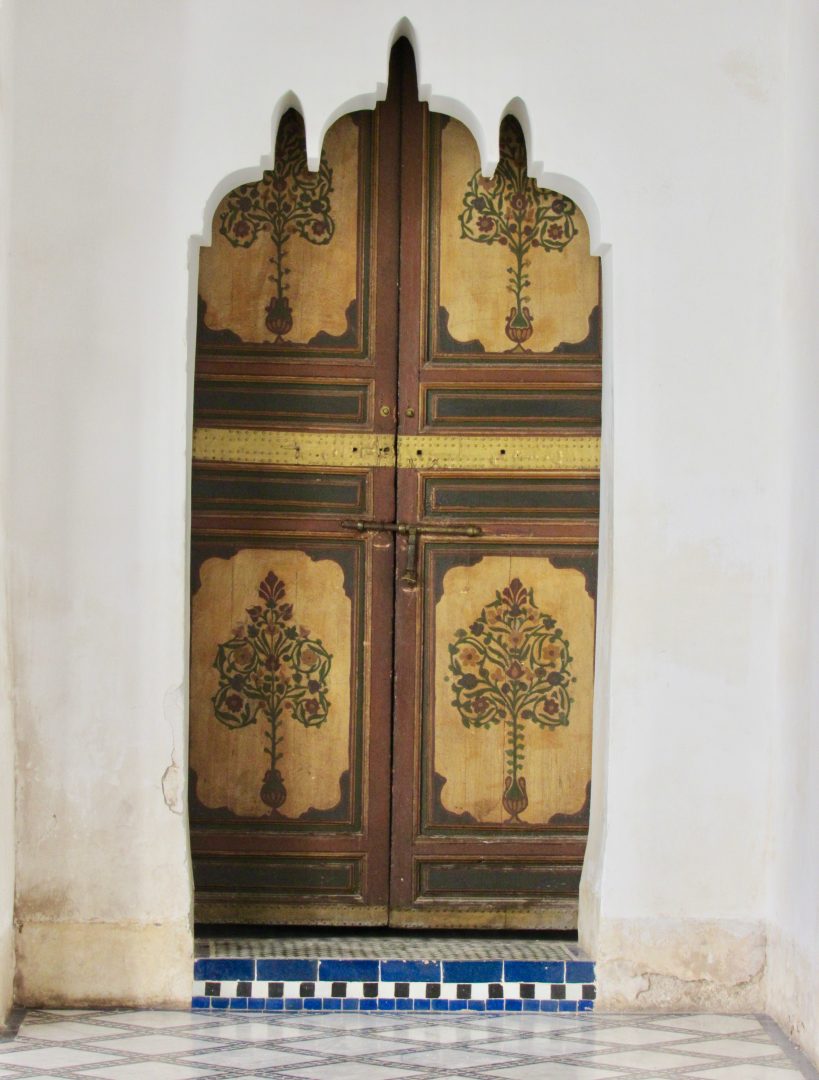 Some of the best artisans in Morocco, especially from Fez, came to work in the Bahia Palace. They spent 14 years building this site. Painted ceilings with hanging lamps, mosaic walls, carved wood, classic columns, windows, and mosaic floors. Natural light provides clarity to most areas. 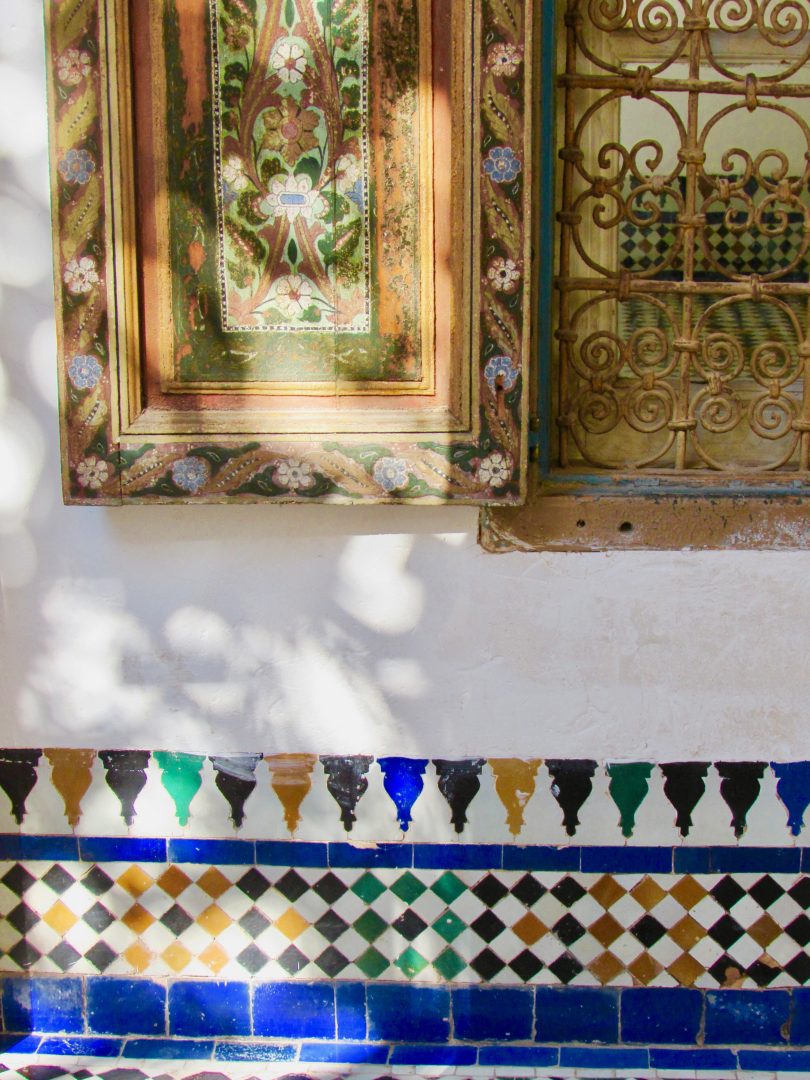 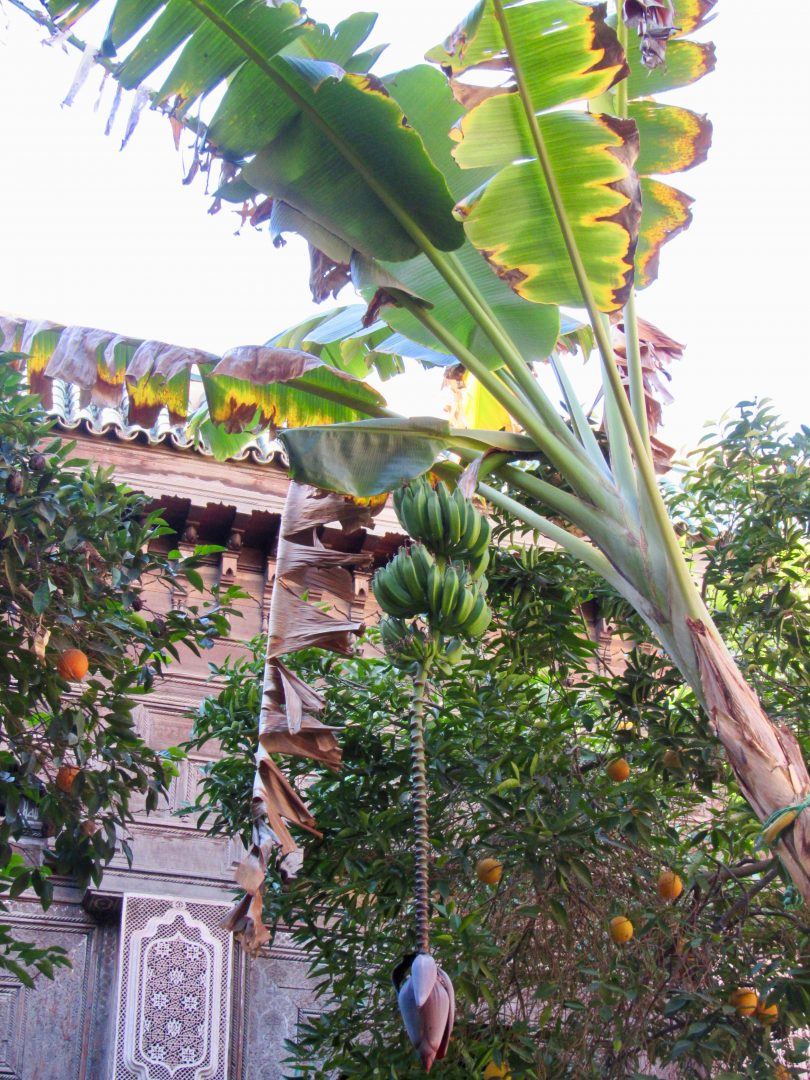 In addition there was an orchard, mosque, Koranic school, stables and even a hammam on the property. In total there are about 150 rooms, but only part of the Bahia Palace is open to the public. 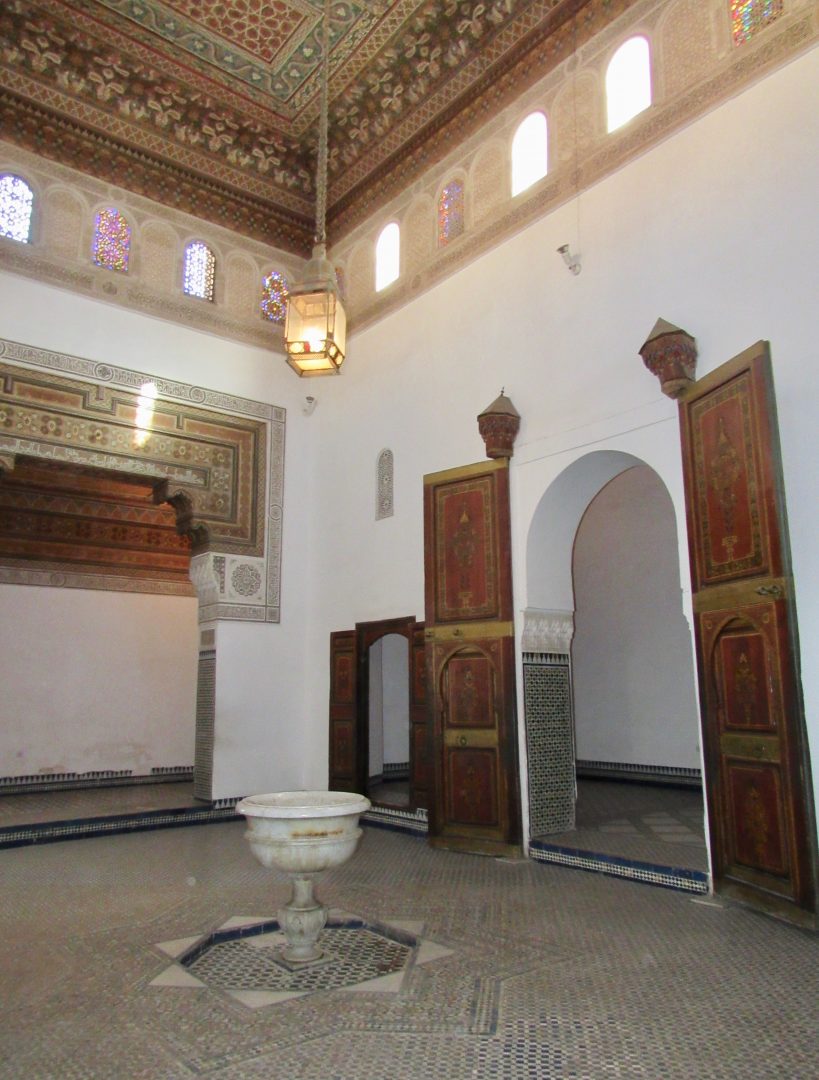 When you enter you pass the small riad that was part of the addition of Bou Ahmed. Then you will go to the large royal courtyard painted in yellow and blue that is part of the original palace of Si Moussa. 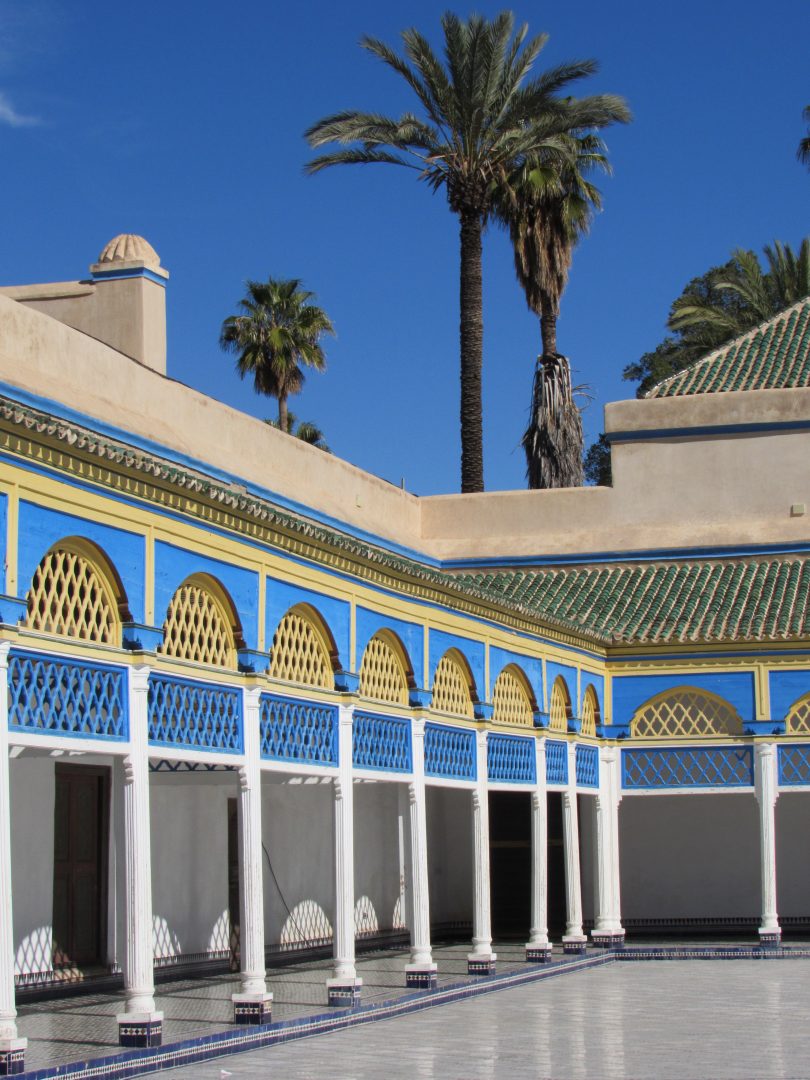 When you visit the patio you can reflect on all the people who came to this place to stand for hours in the sun to ask for mercy from Bou Ahmed. 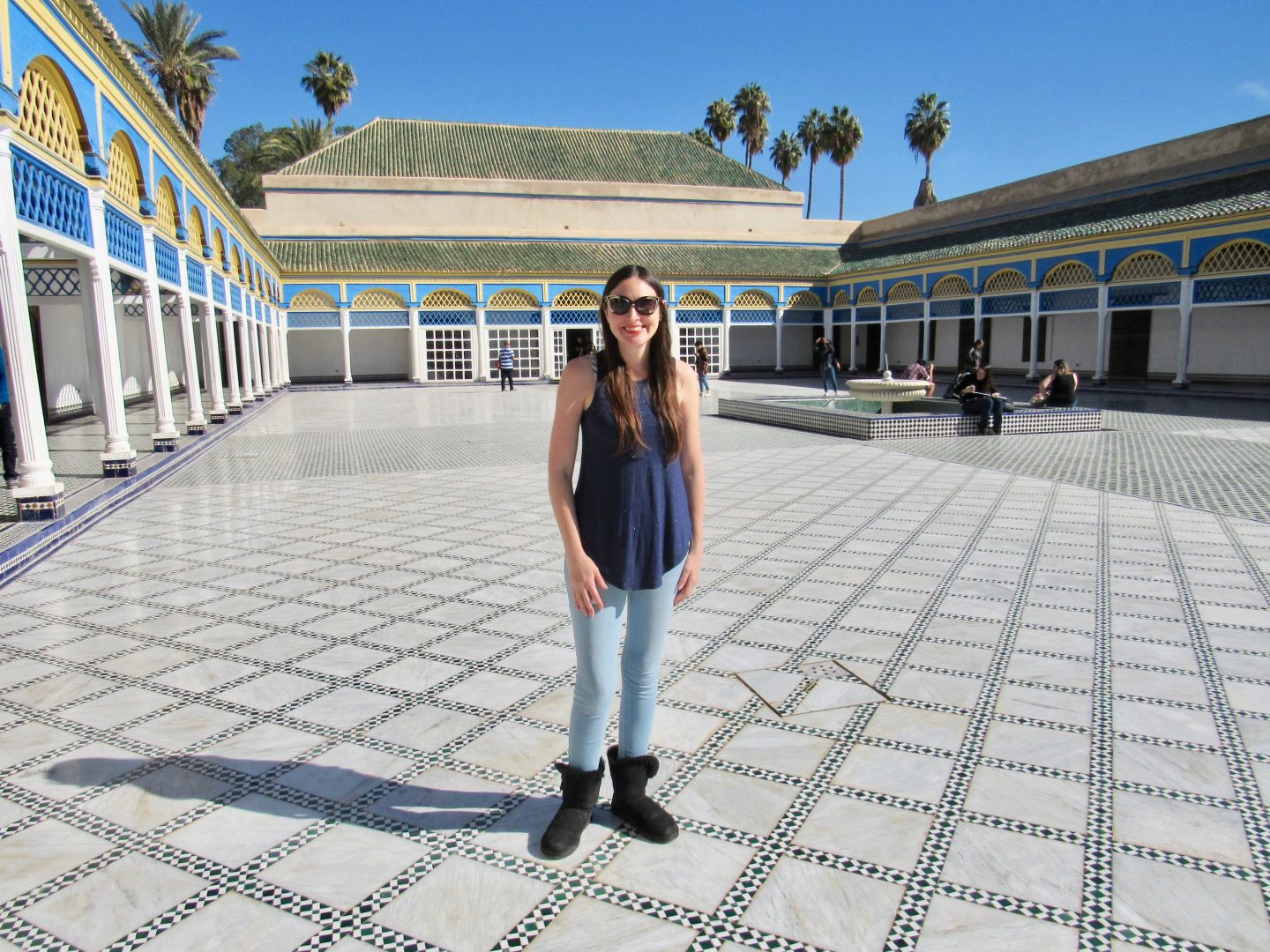 You can see the colors still equally vibrant over a century later. 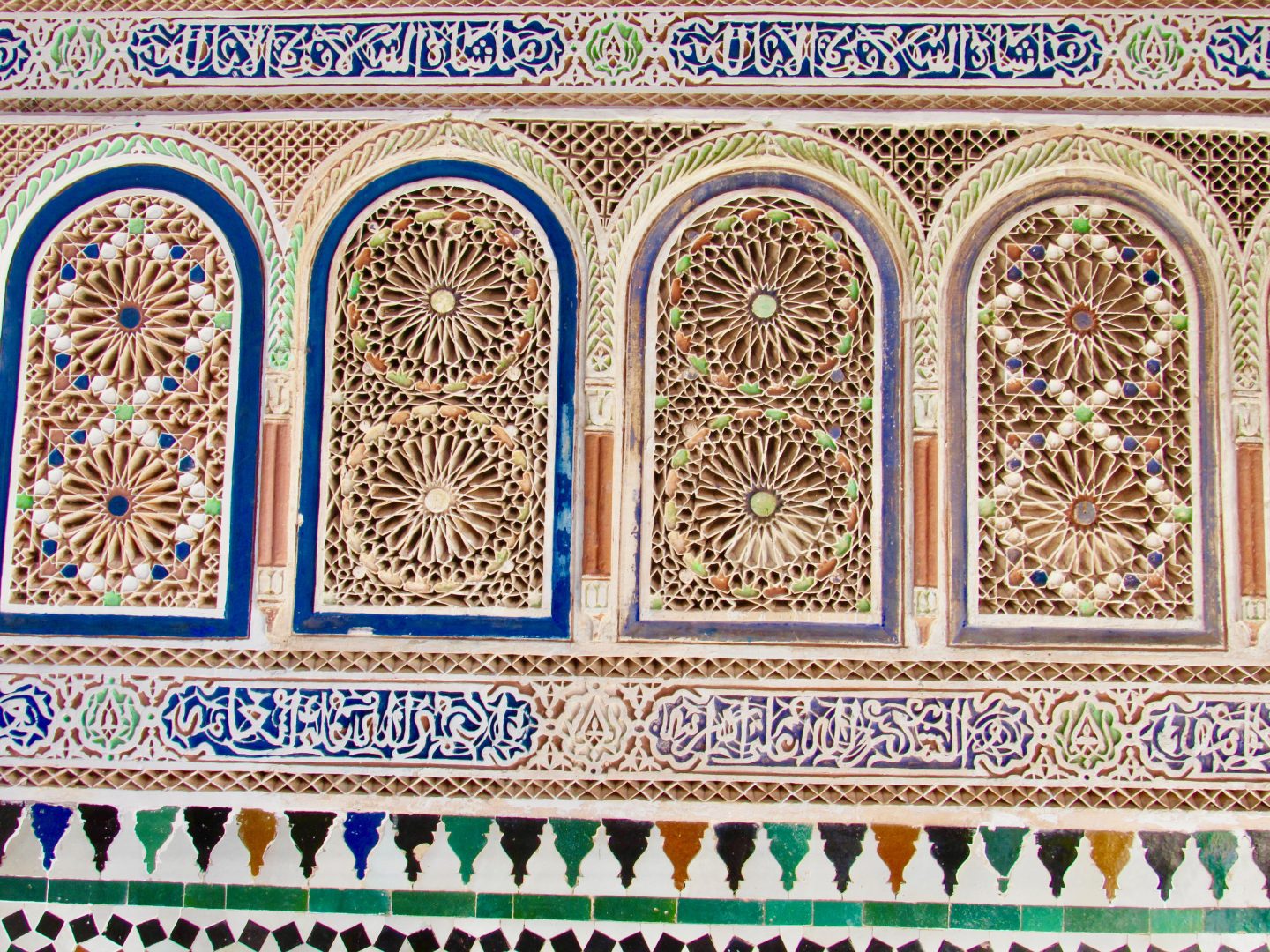 Many pieces were stolen by Sultan Abd al-Aziz when he sacked the palace after the death of Bou Ahmed. Some parts were saved as the marble patio and the residences around it. 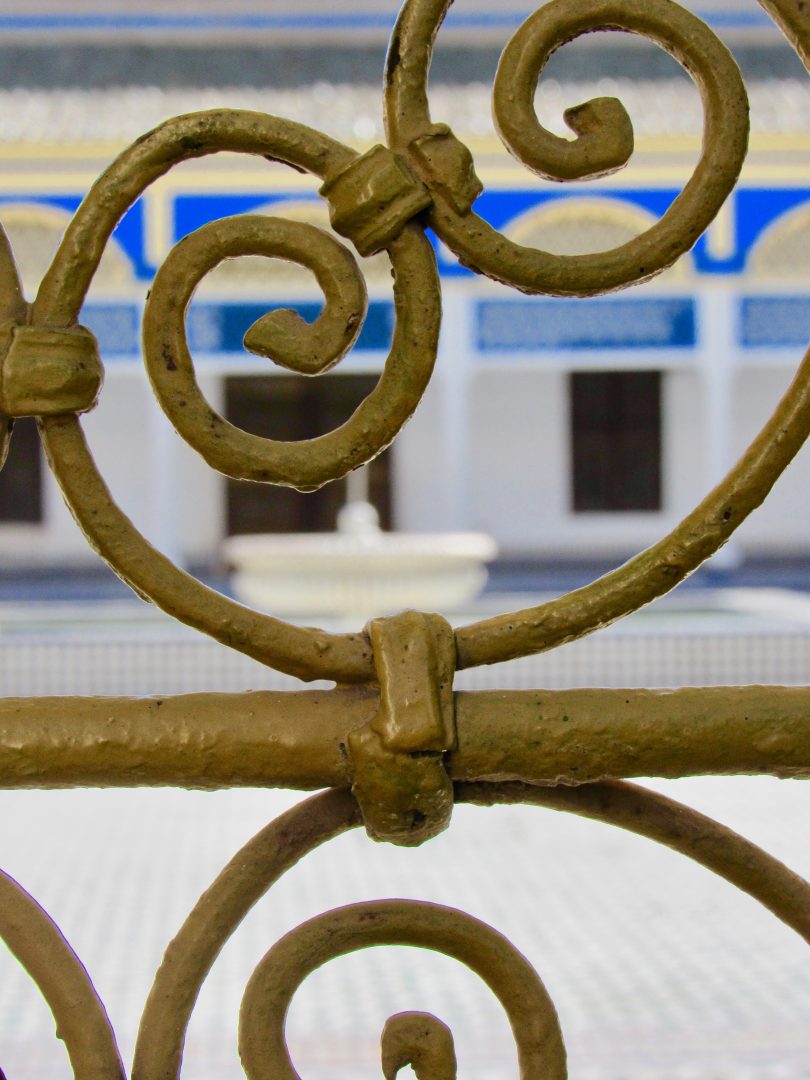 In 1908 the war chief Pasha Glaoui takes the Bahia Palace as a place to serve his French guests. They were so impressed by it that they decided to turned it into the general’s house in 1911. Lyautey, a general resident of France in Morocco (future Marshal of France) lived in the palace during the French protectorate. He also used it as a residence for French officers. He modernized the place a bit, adding fireplaces, heating and electricity. 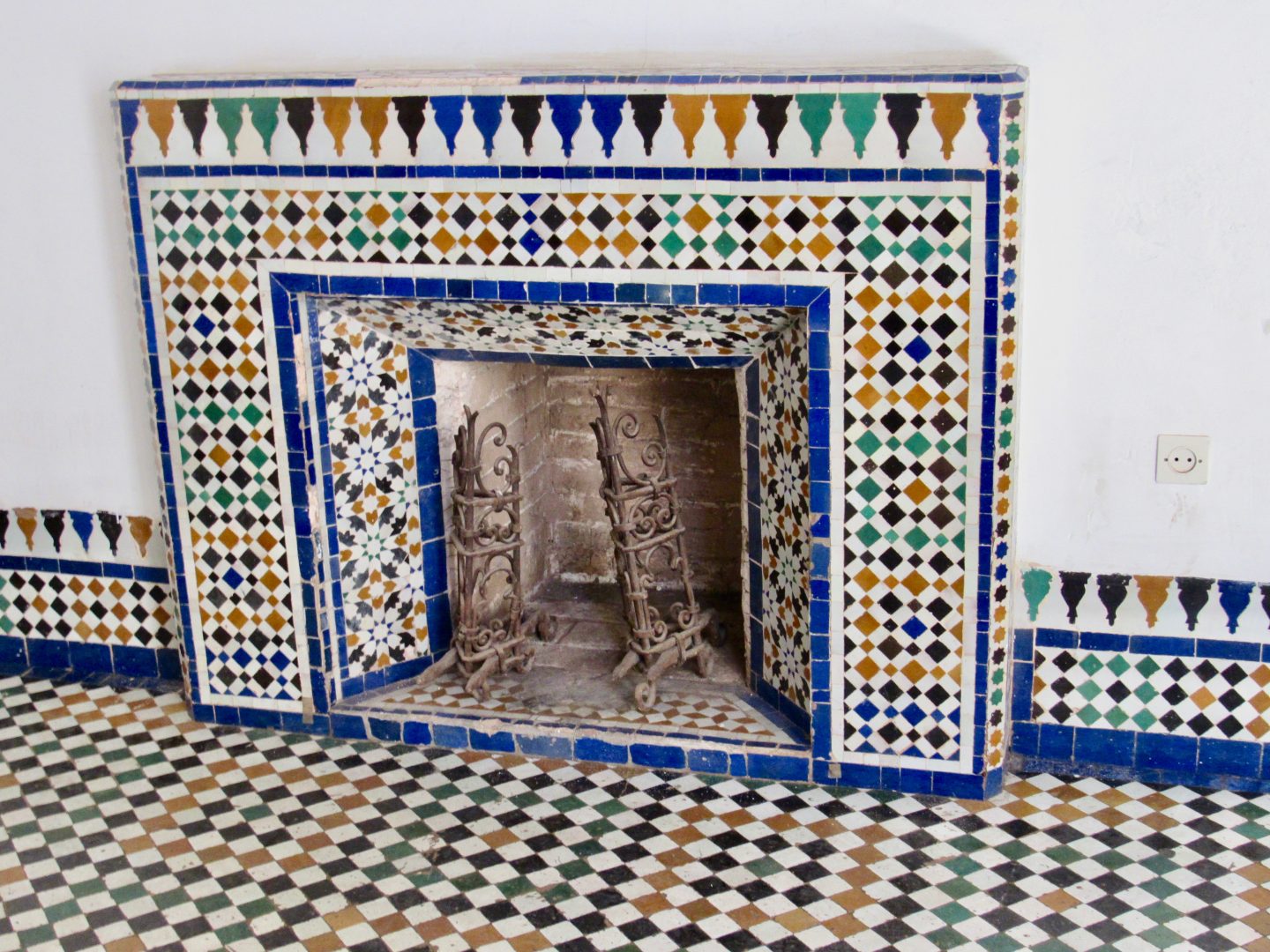 Today, the palace is a cultural heritage of Morocco and is one of the most visited tourist sites. Open every day from 9 a.m. at 5 p.m. with an entrance fee of €1. You can walk from your hotel in Marrakech if you stay in the medina. 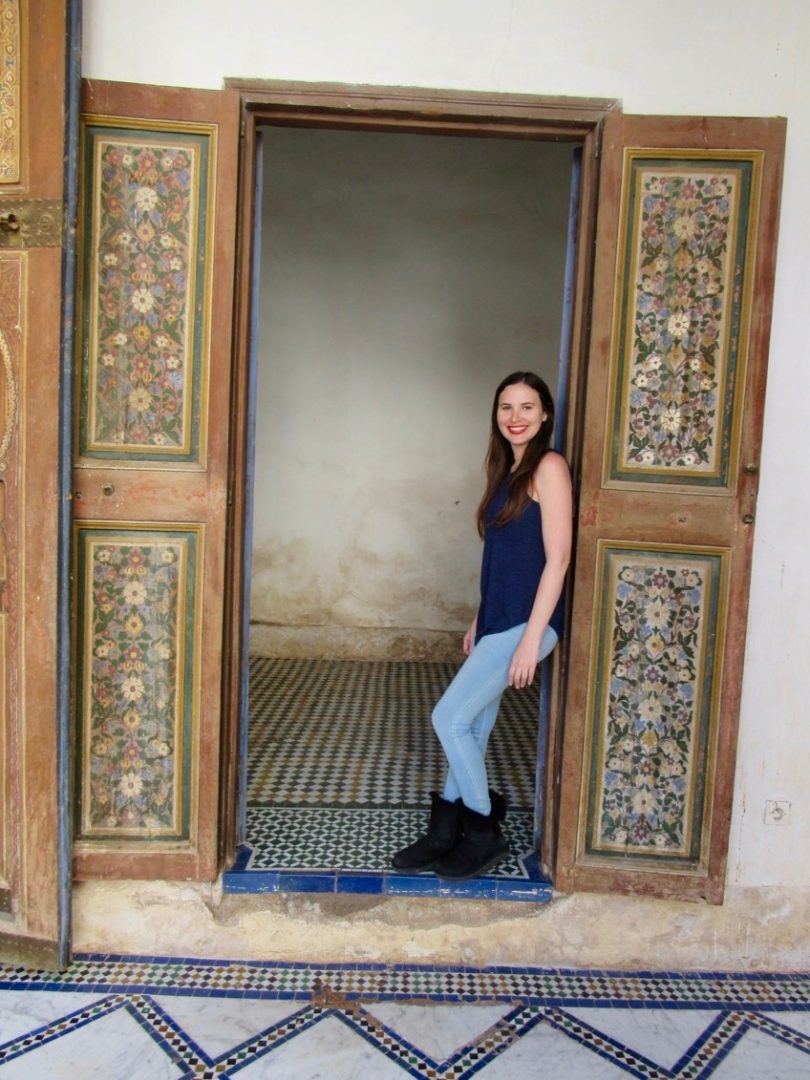 Photos of the lamps and ceilings (which I loved!!!): 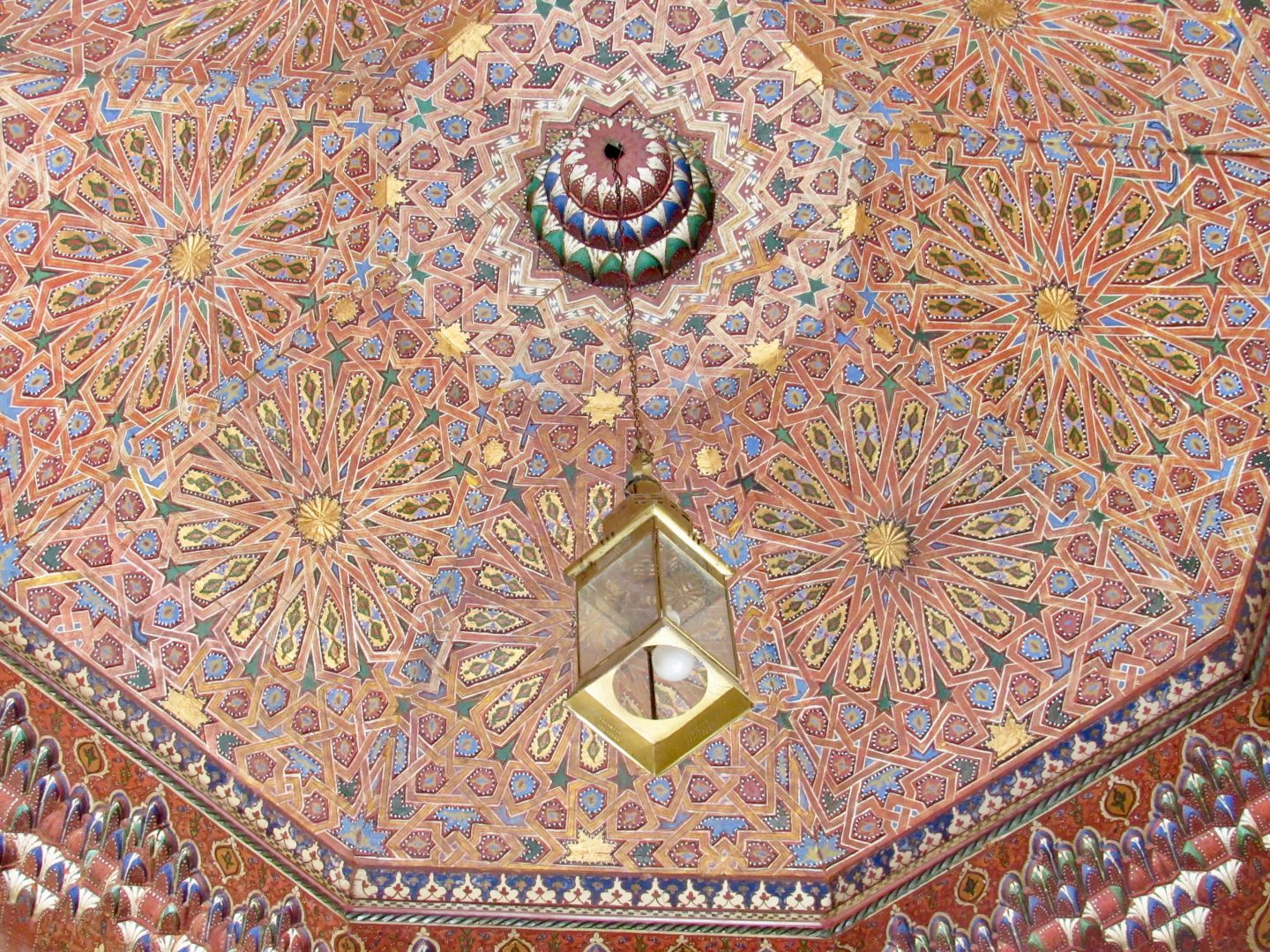 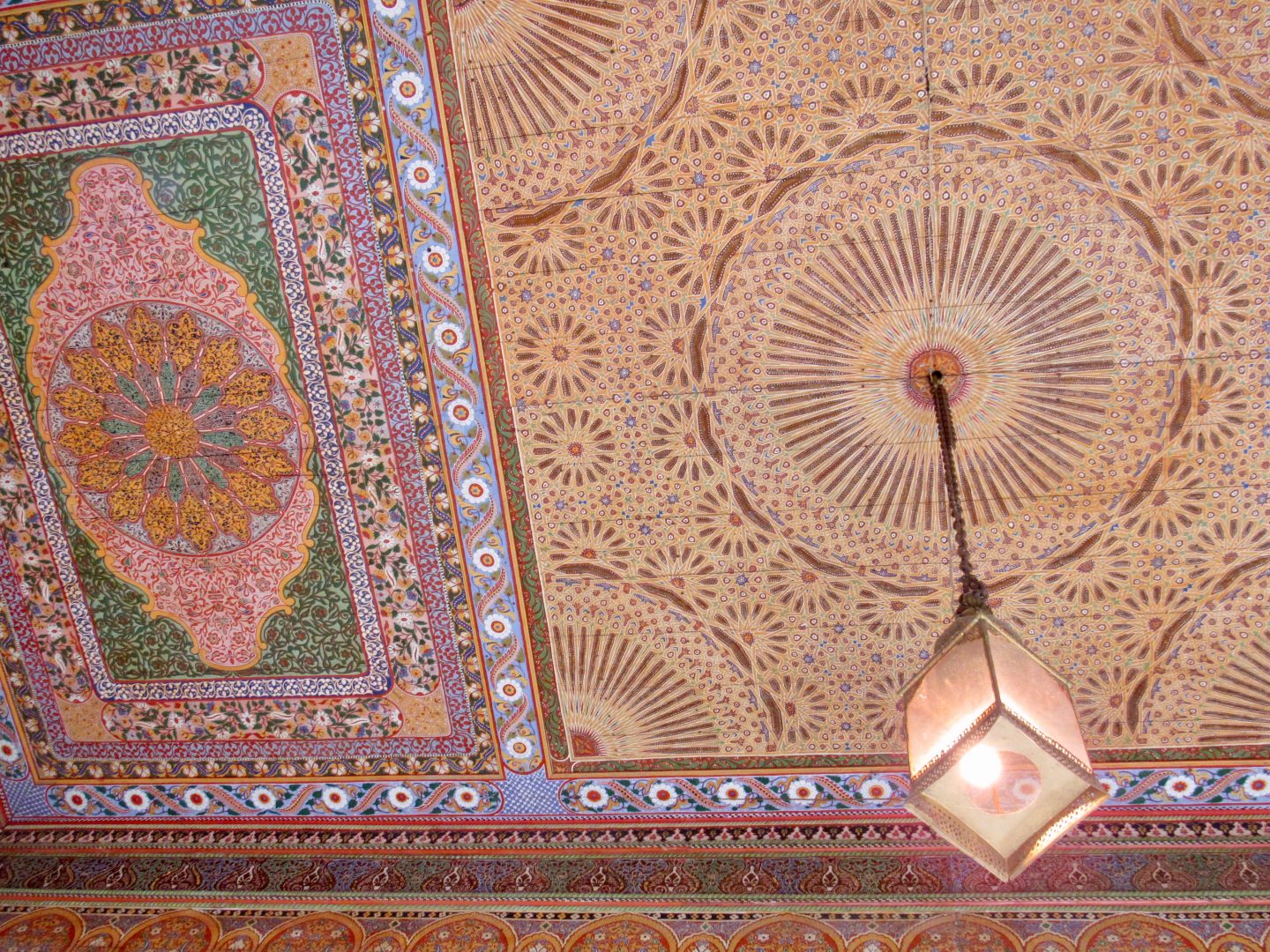 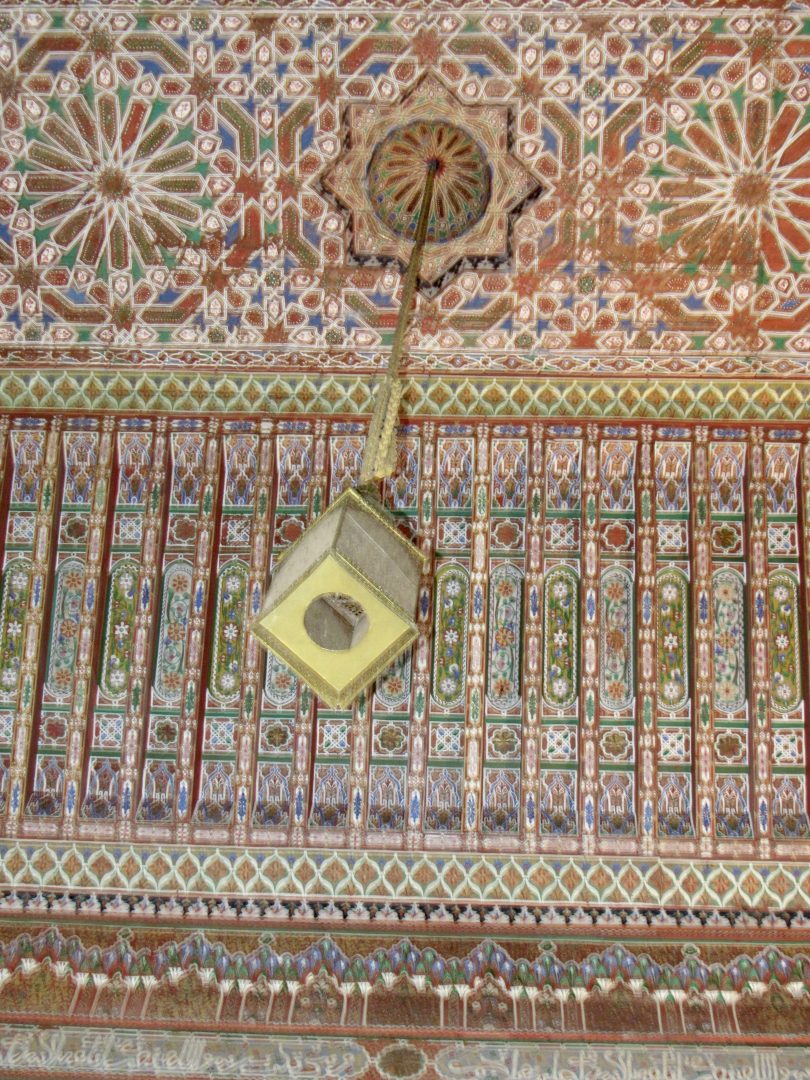 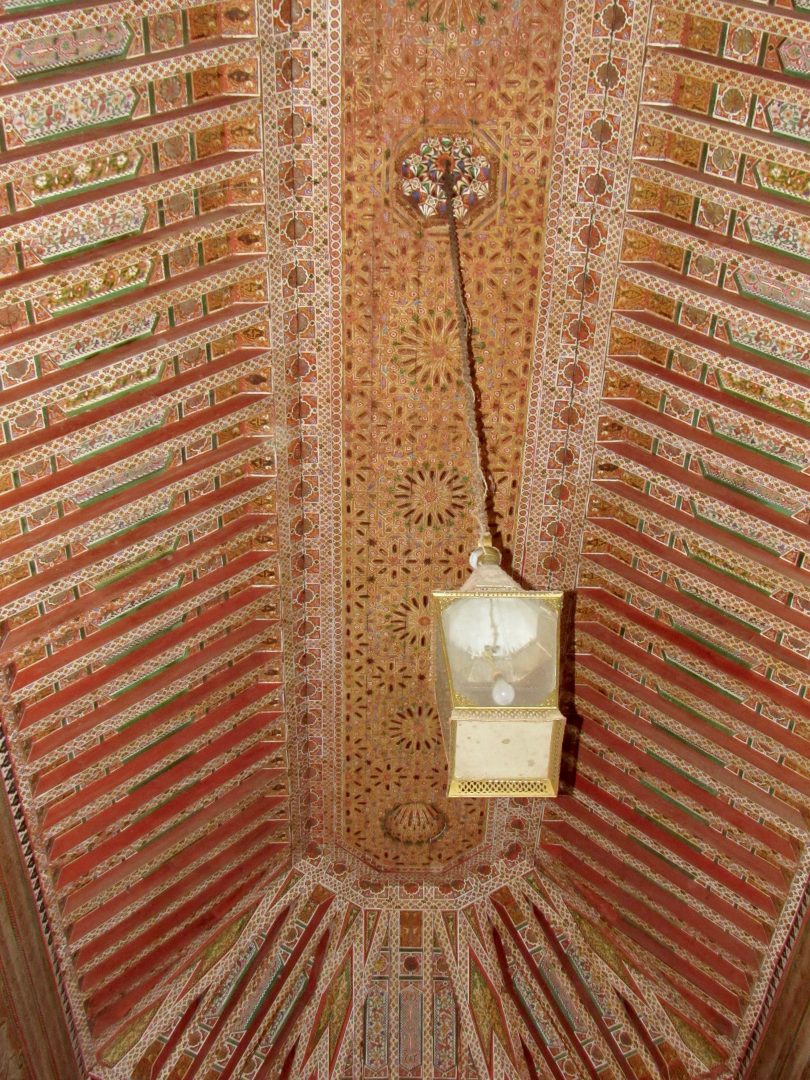 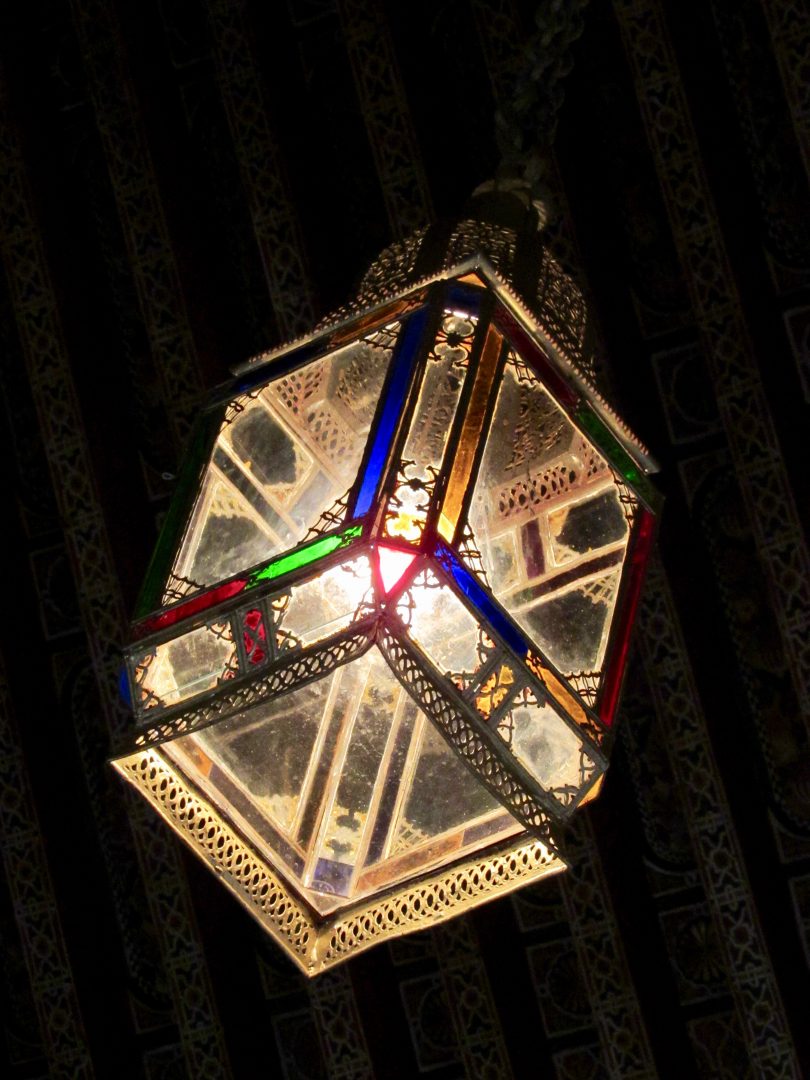 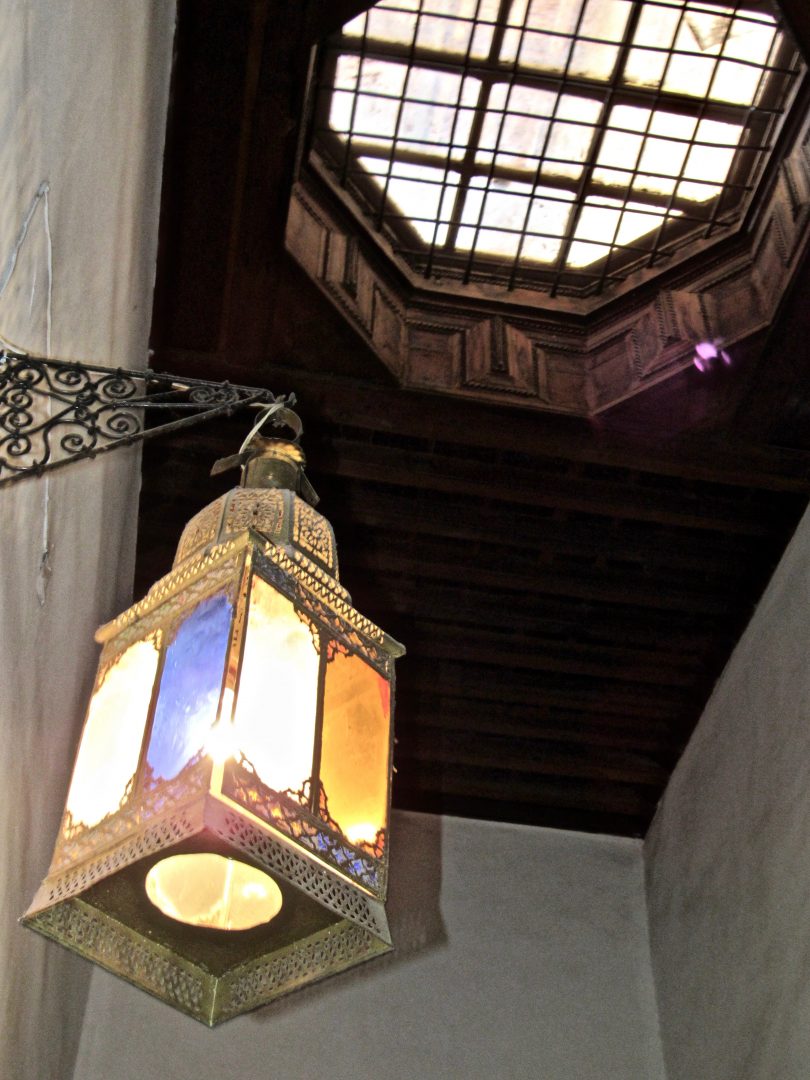 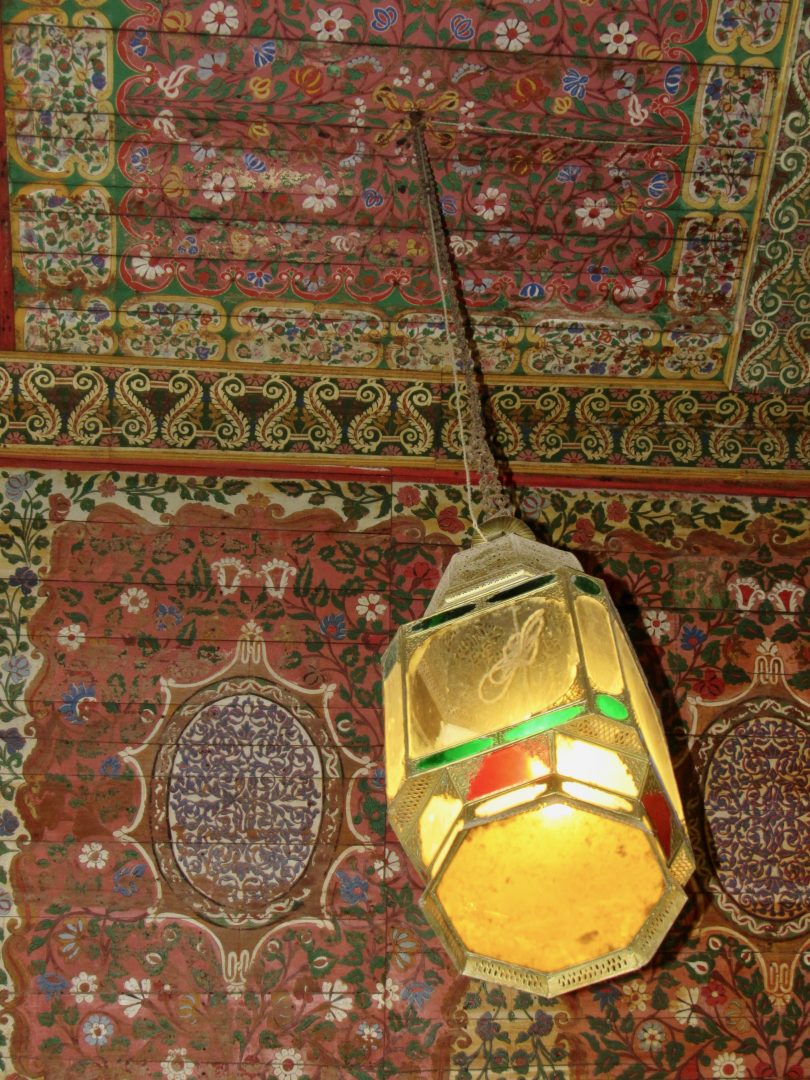 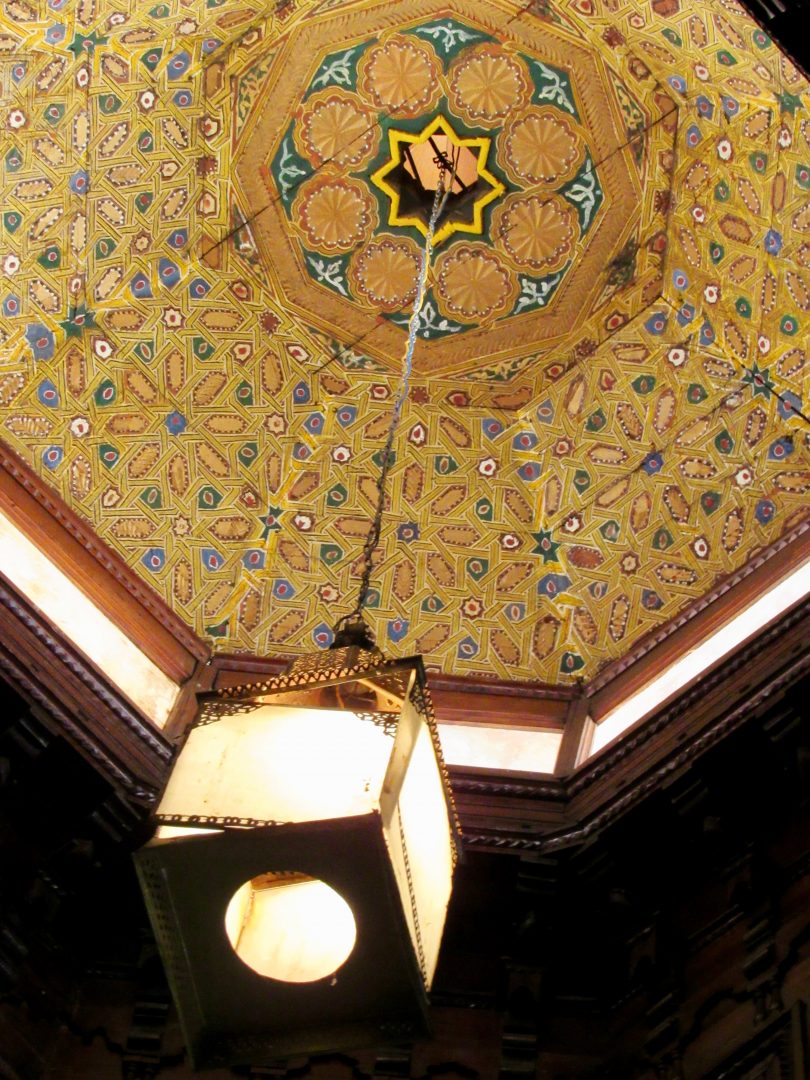 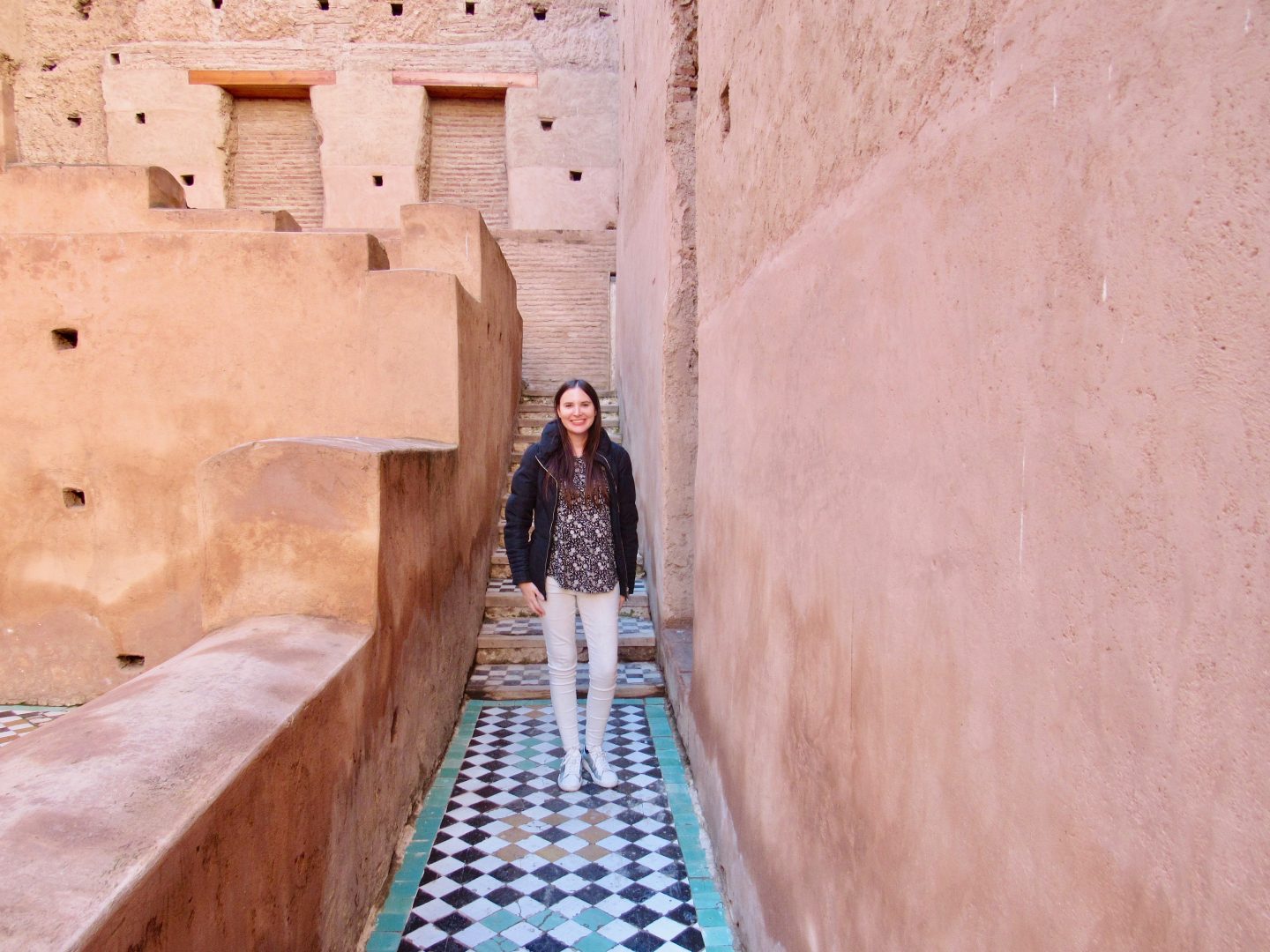 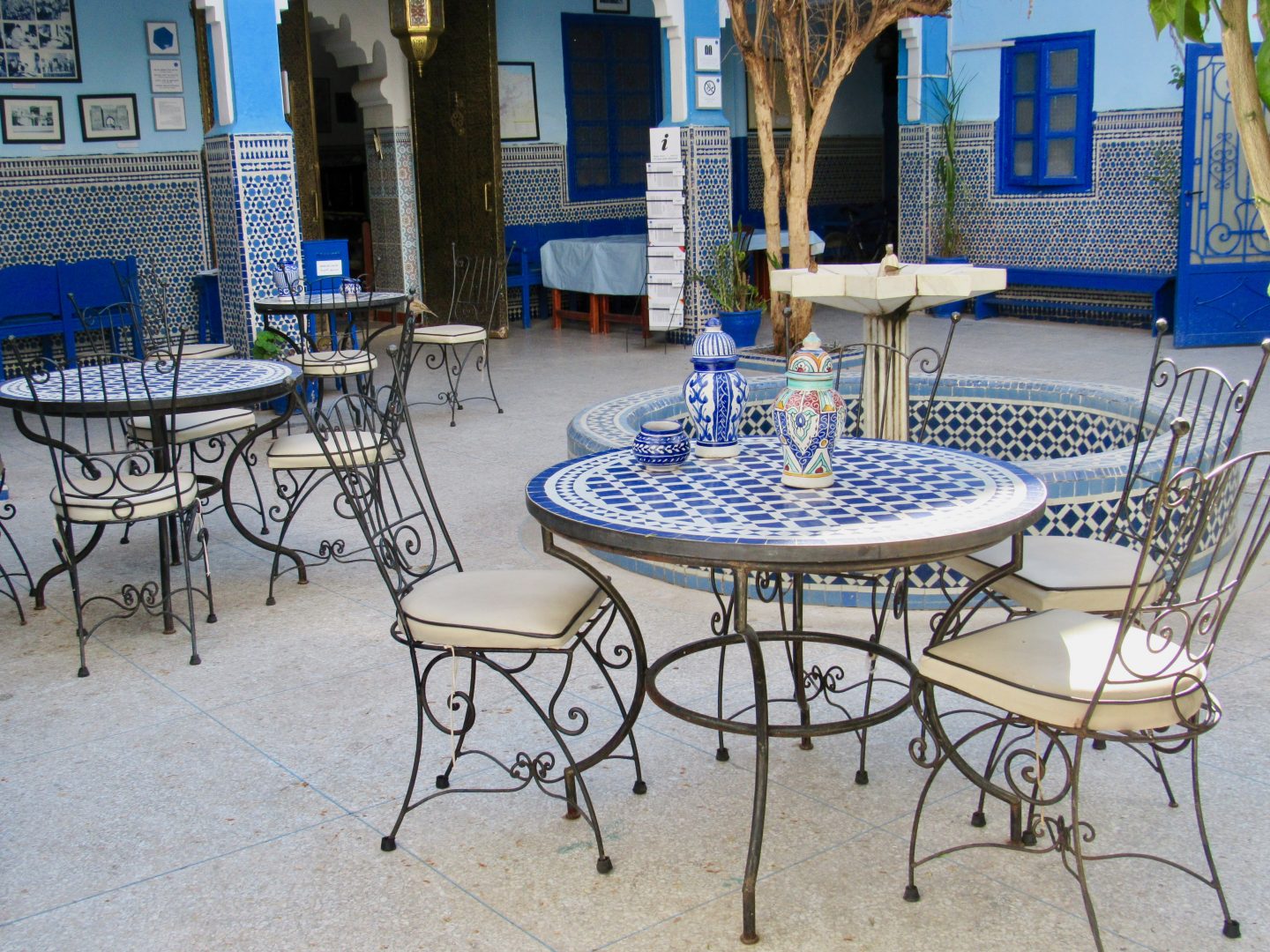 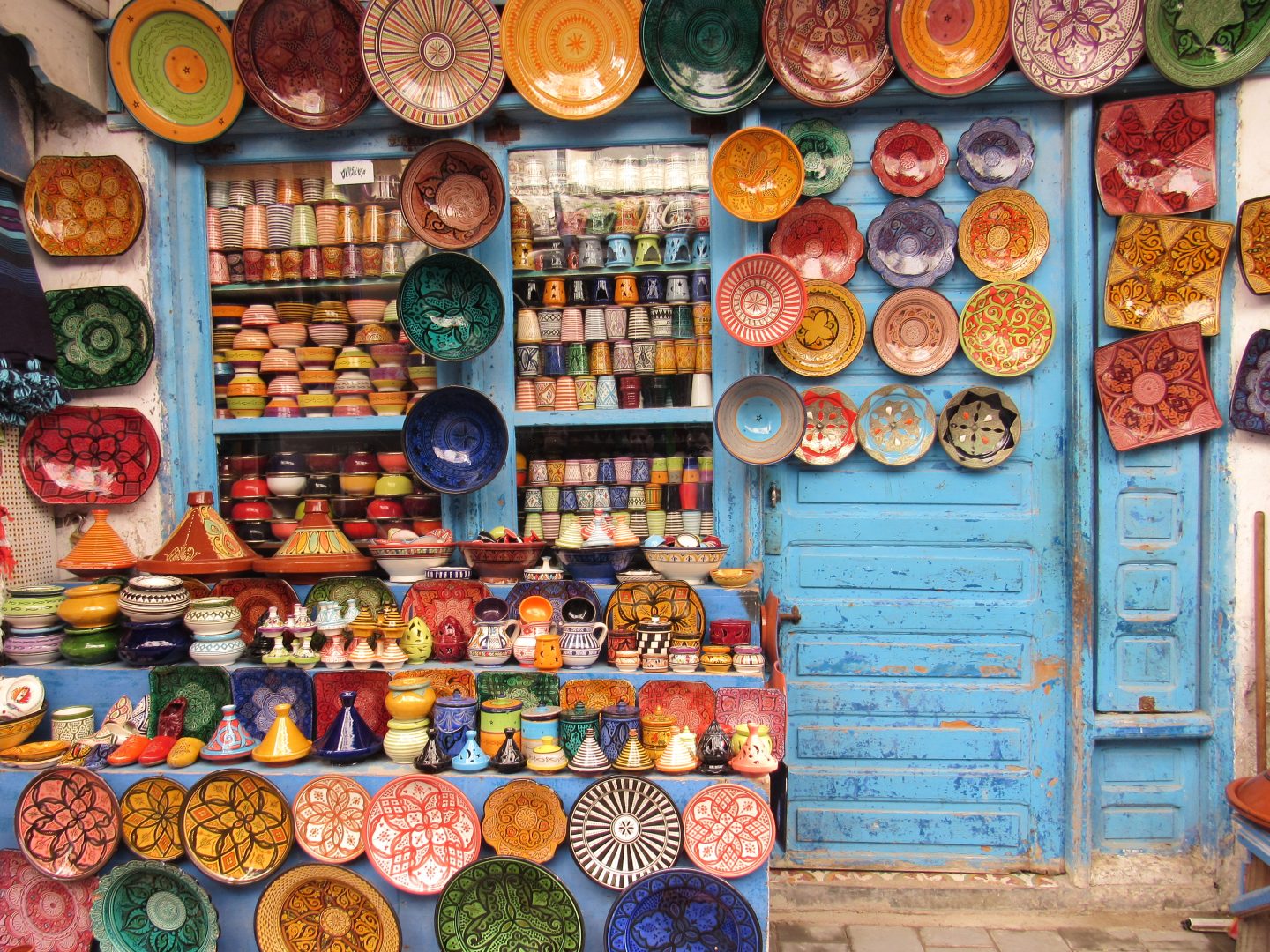