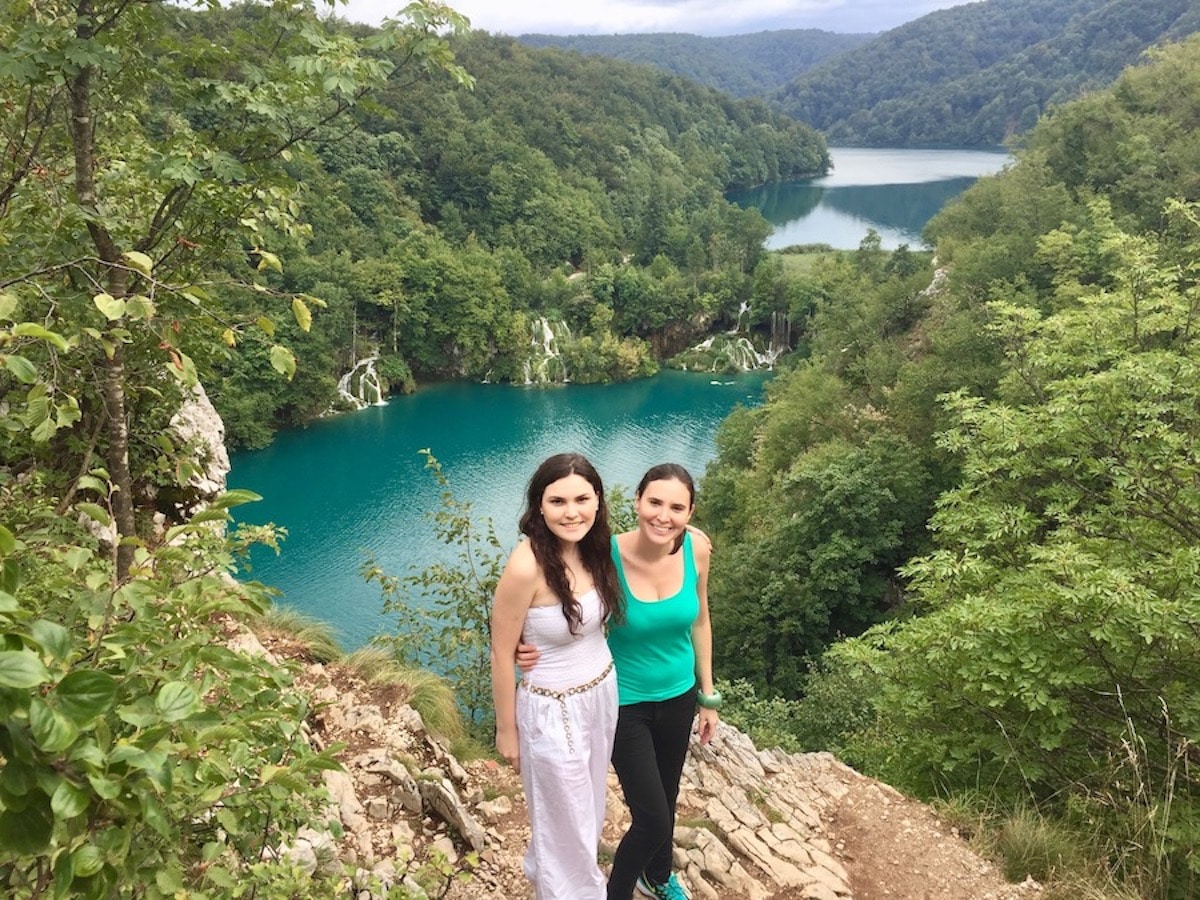 Our trip to Croatia started in the capital, Zagreb, since we went by train from Budapest, Hungary. After spending a few days exploring, we decided to change the scenery and go south, to the Dalmatian coast. We decided to rent a car, which was a problem since they barely had any automatic cars, and drive 400 kilometers to Split. On the way we stopped at the Plitvice Lakes National Park.

To get to Plitvice from Zagreb you must take the state road D429 that goes through the eastern part of the park. There are two entrances to divide the flow of people. Each one has its own parking lot that has a cost per hour or per day. If you do not want to go for the day, you can stay at a hotel in Plitvice Jezera. The good thing about this option is that you can arrive as soon as the park opens and have it for yourself.

It is recommended to buy tickets in advance in high season (June to September). Pay attention to the selected schedule since you will not be allowed to enter at another time. During the summer the park opens from 7 a.m. to 8 p.m. In the fall and spring from 8 a.m. to 6 p.m. and in the winter from 8 a.m. to 3 p.m. Entry tickets cost four times more in the summer than in the winter. Autumn and spring have an intermediate rate. There are one and two day tickets.

Obviously if you go in summer you should expect there to be many people. Plitvice is the main tourist attraction in Croatia with more than one million visitors per year. Therefore, there will be congestion on the wooden platforms and lines to take the boat or the panoramic train. It also rains less, so the waterfalls have little water. The best time to visit is autumn and spring. The park gets very nice when the leaves change colors. I went in the summer, but I would have liked to have seen that spectable. In winter there are very few people. Sometimes it can snow and the waterfalls freeze, which is also impressive.

Unlike the Krka National Park, in the Plitvice Lakes, swimming is not allowed since 2006.

Plitvice is one of the first parks in Croatia, and it is also one of the largest. These lakes, located on the border with Bosnia and Herzegovina, have been in contact with humans for thousands of years. During the Roman Empire, Julio Cesar incorporated the province of Illyricum. For centuries this land was fought between the Austrian and Ottoman Empire. Even in 1805 it was conquered by Napoleon and then returned to Austria until 1918.

Since 1861, the Plitvice Lakes began to be a tourist attraction. Although several efforts were made, it was not until 1949 that the Second World War ended, when it was declared a national park. Strict protection measures were taken. In 1979, it was inscribed in UNESCO’s World Natural Heritage list for its “outstanding natural beauty and uninterrupted production of travertine (tufa) through chemical and biological action.”

We must remember that Croatia is a fairly young country, its independence was in 1991 when Yugoslavia was dissolved. During the war there were armed conflicts in the Plitvice area between the Croats and the Serbs who were loyal to Belgrade. This caused a lot of damage to the infrastructure and even mines were placed. As a result, UNESCO placed the park on the list of Endangered Heritage until 1998. In 2000, an additional 102 square kilometers were added to the national park to protect underground tributary flows. The park is still in danger as the sewage is not treated in the area and has polluted the water of the lakes to the point that it can no longer be drank.

The word “Plitvice” was written by a priest in 1777. Its name is due to a natural phenomenon that creates lakes. Nature formed shallow basins (pličina, plitko or plitvak means shallow in Croatian) that have been filled with water. Over time, water has changed limestone and created travertine barriers that hold it back. These barriers continue to grow at a rate of 1 centimeter per year. These dams are deposited by the action of moss, algae and bacteria.

When you visit you will notice how the water tones change from green, blue or gray. The amount of organisms and minerals in the water, in addition to sunlight, cause these changes throughout the day.

In your visit to the Plitvice Park you can choose between four trails and seven routes. Therefore it can take at least 6 hours to see the entire park but if you take the boats and the panoramic train you can do it in less time. The upper part of the lakes takes two hours while the lower part of the lakes takes three hours. Veliki Slap is the highest waterfall in Croatia with 70 meters of altitude and is found in the lower lakes. The choice really depends on how long you have and your physical condition. My recommendation is to visit both parts since it is a really beautiful site.