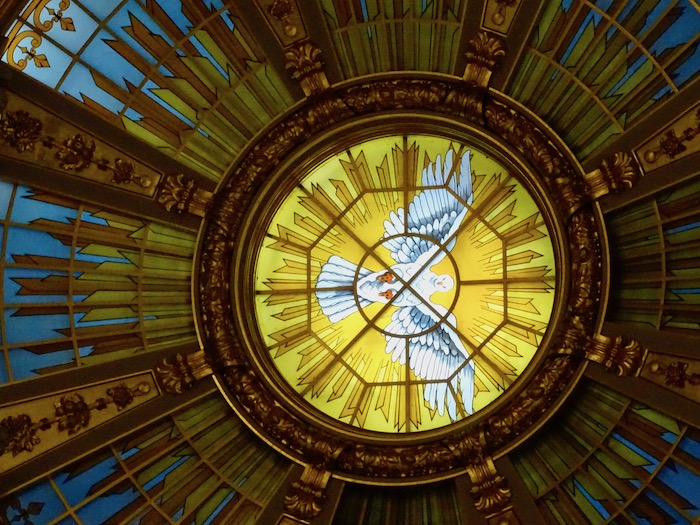 The Berlin Cathedral, also known as the Berliner Dom, is one of the most iconic buildings in the city. Those who visit Berlin will probably see it as it is in the city center. This church, like so many others in Europe, started Catholic and then changed to Evangelical.

I requested a press courtesy to go with my friend Armando. On arrival they made us go through another door. The lady who received us asked me in German if she should only let us in or if I needed to interview her. My German is so basic that I could hardly understand what he meant, so I was amused by the idea.

How to visit the Berlin Cathedral?

The Berlin Cathedral, which is the largest in the city, is located in the Mitte neighborhood at the northern end of the Museum Island. Next to Lustgarten, the former location of the Berlin Botanical Garden. It is easy to get to by public transport from any hotel in Berlin. If you take the S-Bahn train you must get off at S Hackescher Markt. There are several tram stops nearby, including S Hackescher Markt, Spandauer Str./Marienkirche, and Am Kupfergraben. It is also possible to go by bus, the closest stop is Lustgarten.

Other ways to see the Berlin Cathedral:

Hours vary depending on the season. In summer, from March to October, it opens from Monday to Saturday from 9 a.m. to 8 p.m. and on Sundays from 12 p.m. to 8 p.m. It closes an hour earlier during the winter, from September to February.

If you visit the Berlin Cathedral to attend a mass, you can enter at no cost. Masses are held on Sundays at 10 a.m. (with English translation) and at 6 p.m. in German. On Monday, Tuesday, Wednesday, and Friday there are evening prayers at 6 p.m. There are also masses on Thursdays but they are musical.

Usually, on the second Thursday of the month, the “Taizé” worship service is held, where the whole church is lit with candles. Saturdays at 6 p.m. they do “Vesper” filling the church with organ and choir music for 45 minutes. You can visit the website of the Berlin Cathedral for more information on special events.

Those who simply want to visit the cathedral must pay €7. Admission is free if you have the Berlin Pass. They charge as they have to earn 97% of the budget, only 3% comes from church taxes and grants from the city of Berlin. All Germans, like residents, must fill out a form stating their religion. The government charges 8-9% above the amount of tax that the person pays to give it to the church. In 2018, German churches reported revenues of €538 million. From that fund, the Protestant church received €319 million and the Catholic church €227 million. Many citizens do not report their religion to avoid paying this tax.

According to the website of the Berlin Cathedral they need about €15,000 per day for operation. This includes payment of musicians, services, electricity, heating, employees and security. But mainly they need funds to maintain the church. Black inlays of soot, rubber sand, and dust have accumulated on the sandstone, preventing it from breathing. This layer should be removed in addition to sealing any cracks and leaking joints. During your visit you will see many signs asking for donations.

You can buy tickets online to save the line, especially in high season. A guided tour, which starts every 20 minutes, is included in the entry cost. Visitors are seated on benches as the guide tells the story of the Berlin Cathedral.

The history of the Berlin Cathedral dates back to 1451 when the prince-elector, Frederick II “Iron Tooth” of Brandenburg decided to move to the new Berlin Palace in Cölln (Museum Island). He made a pilgrimage to Israel, returning through Rome where he met with Pope Paul II. With the support of the Pope, the Chapel of Saint Erasmus was established as a Roman Catholic canonical university.

This canonical university became Lutheran in 1539, when the Prince Elector Joachim II Hector was converted. However, he followed different principles than the current ones and he filled the church with luxurious objects such as rugs, relics and antependia.

In 1608, Prince-elector John Sigismund dissolved the university and the church was renamed the Supreme Parish Church of the Holy Trinity in Cölln. He was a Calvinist (in Germany it is generally called the Reformed Church) and converted the church, being the only one until 1695. But did not compel the population to convert and most continued as Lutherans. In 1747, the Parish Church was demolished to build the new Baroque extension of the Berlin Palace.

In September 1750, the new Calvinist Baroque Supreme Parish Church was inaugurated. Then in 1817, under the command of King Frederick William III of Prussia, the Calvinist and Lutheran congregations were united under the Evangelical Church. To celebrate this, they hired architect Karl Friedrich Schinkel to remodel the interior and exterior of the church in a neoclassical style.

There was talk of building a new building in the nineteenth century, but there was no money after the Napoleonic era. Everything inside was removed and the building was demolished in 1893.

Martin Luther would not have survived the persecution of the Catholic Church had it not been for the fact that the elector (monarch) of Saxony hid him in Eisenach’s castle. Since those times, there has always been a close relationship between the Protestant Church and the head of the German state. Today, neither the Chancellor nor the President of Germany uses that role. But in the time of William II, the last Emperor of Germany, the role did apply.

In 1893, the imposing construction of the new Berlin Cathedral began at a cost of 11.5 million marks. The idea was to construct a building for the Protestant denomination comparable to St. Peter’s Basilica in the Vatican City. At 114 meters (374 feet) long, 73 meters (240 feet) wide and 116 meters (381 feet) high, they achieved that goal. It was inaugurated in 1905. Julius Raschdorff carried out this task in a Renaissance style accented with Baroque decorations.

In World War II, the Berlin Cathedral suffered extensive damage from Allied bombardment. Even part of the roof was collapsed by a fire bomb. To save the building, a temporary roof was put up.

St. Nicholas Church in Hamburg was destroyed in World War II. Today it is a monumental Gothic ruin worth visiting.

After the war, the cathedral was left in the hands of the East German authorities in a divided Berlin city. They had plans to tear down the building, but in 1975 reconstruction began. The original design was kept, but they destroyed the ‘Denkmalskirche’ north wing which was a hall in honor of the Hohenzollern dynasty. Very little was spent, just 800,000 marks, on the demolition and redesign, while the restoration cost were 50,000 marks.

In 1980, it reopened for baptisms and weddings. Restoration of the main nave began in 1984 and was inaugurated in 1993. Finally, in 2008, a new gold cross replaced the dome cross. You can see the ancient cross in one of the cathedral’s cemeteries on Liesenstraße 6.

On March 1, 2020 (just before I went) the Hohenzollern Crypt closed for a period of three years. Renovations are expected to be ready in the spring of 2023. The total cost of this investment is €18 million, of which the Berlin Cathedral is responsible for 10%.

90 people from the Hohenzollern House are buried here, including King Frederick I and his wife, Sophie Charlotte. Be sure to visit the Charlottenburg Palace, that was built by them. Other famous people buried in this place are Queen Elisabeth Christine and the great elector Frederick William.

Before the war the crypt was entered through the ‘Denkmalskirche’, but after the remodeling the entrance will be through the ‘Predigtkirche’ Sermon Church. In addition, it will have an informative area with animated videos that explains the history.

What to see in the Berlin Cathedral?

Outside, the building has a monumental dome with four towers on the sides. It is a mixture of high Italian Renaissance with a more flowery Baroque style. If you’re in decent physical shape, it’s worth climbing the 270 steps to get outside the dome.

Turning around is a bit of a maze, opening endless doors until you finally reach the bottom of the stairs. The panoramic view is impressive. You can see most of the city including the Fernsehturm Television Tower, the New Synagogue, the New National Gallery in Berlin and the Reichstag German Parliament.

The inside of the Berlin Cathedral is quite ostentatious. You will find many marble columns with golden ornaments. The marble and onyx altar was designed by Friedrich August Stüler. Be sure to look up to see eight angels symbolically holding the dome. Outside, eight more were placed for protection.

Probably the most impressive is the pipe organ, built by the Wilhelm Sauer factory. Originally built in 1905, with over 7,000 tubes. It has 113 stops, including three rows of 32 ‘tubes in the pedal division, played by a 4-manual console.

There is a small museum that has paintings, designs and models about the history of the Berlin Cathedral. One of the models makes you feel like you are inside it.

They also have a small cafe where we ate sweets and had mulled wine. A visit to this historic building is worth including on your trip to Berlin.

I am sharing some of my favorite sites that I use to plan my trips. Kayak is a site that compares air ticket prices on many sites to present you with the best flight options and prices. 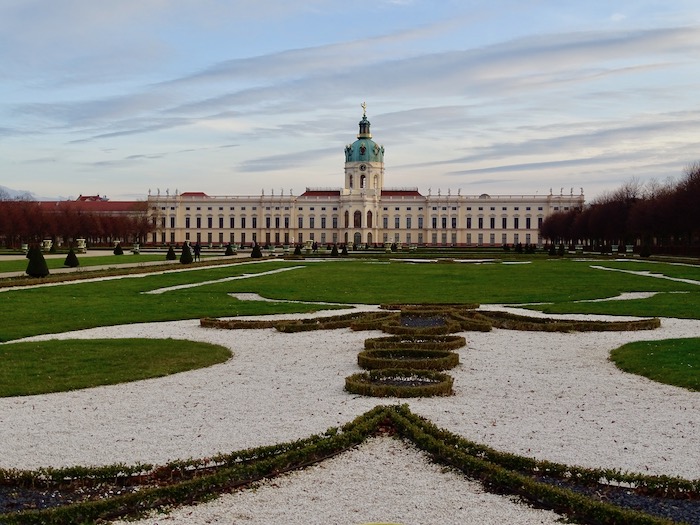 Ursula March 16, 2020 No Comments
If you want to escape a bit of the history of the World Wars in Berlin, then you must visit the Charlottenburg Palace. It was…
Read More

Ursula March 8, 2020 No Comments
The Berlin Cathedral, also known as the Berliner Dom, is one of the most iconic buildings in the city. Those who visit Berlin will probably…
Read More

Berlin Botanical Garden, the Second Oldest in the World 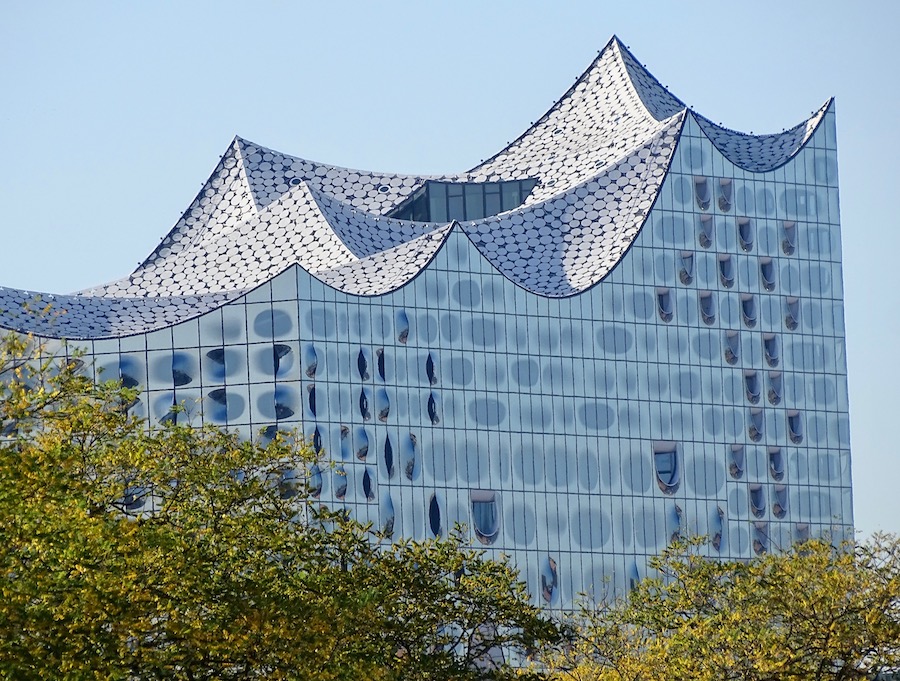 Ursula December 27, 2019 No Comments
The list of landmark and historical buildings in Hamburg is quite long. This city is so impressive that architecture walking tours are offered, taking a…
Read More 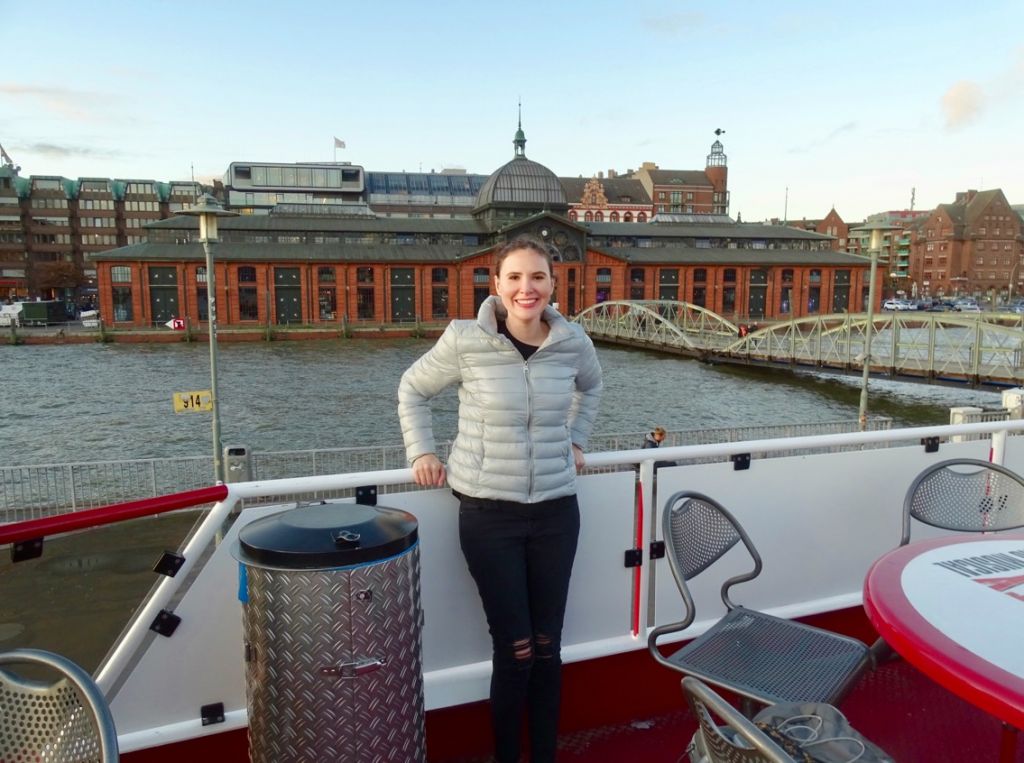 Ursula December 24, 2019 No Comments
You can do many things in one day in Hamburg. As I was traveling alone I decided to stay in Generator Hostel which is located…
Read More 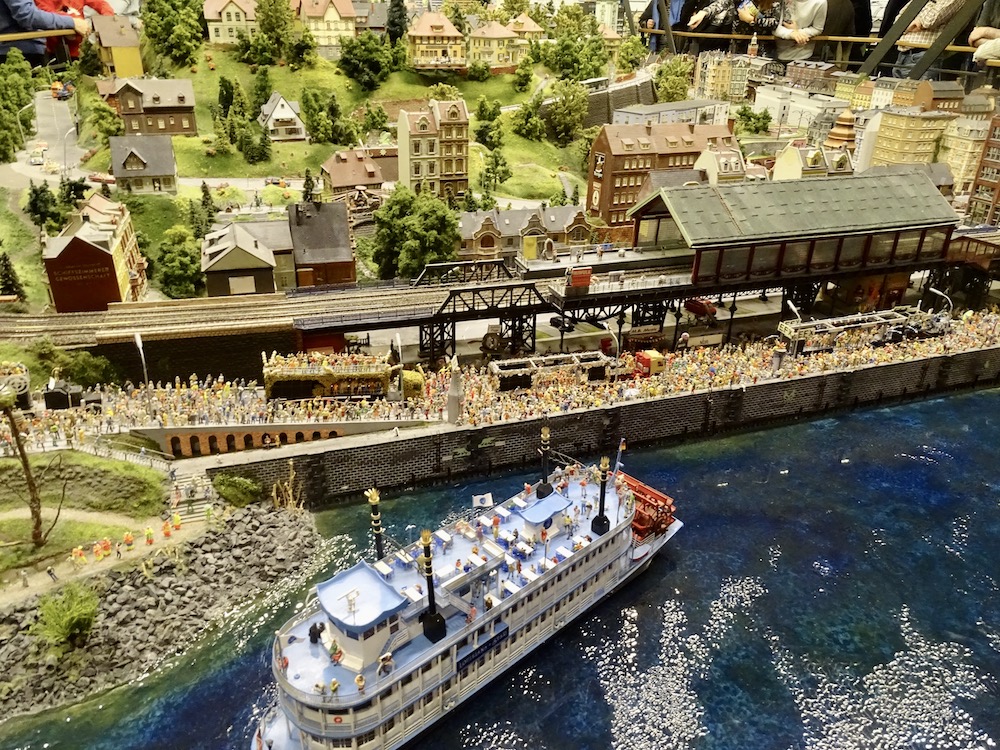 Ursula November 17, 2019 No Comments
One of the best things to do in Hamburg is to visit Miniatur Wunderland. It doesn’t matter if you are a child or an adult…
Read More 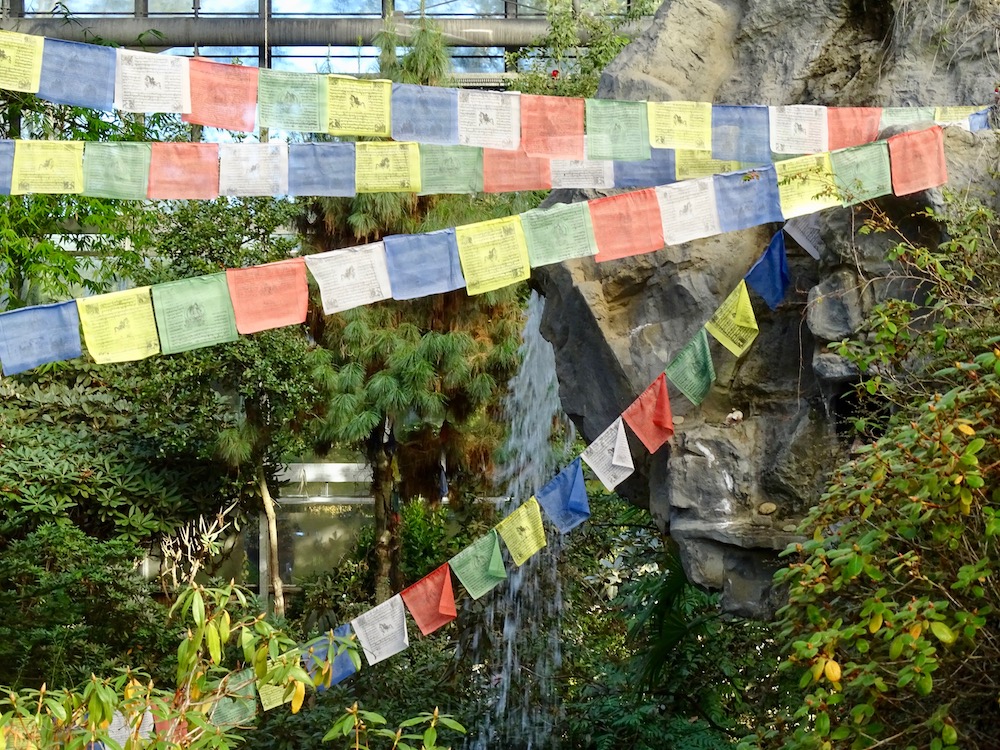